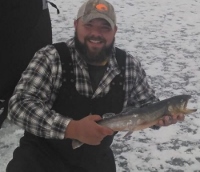 ROCHESTER - Brian George Woodman, 32, of Rochester died unexpectedly on Saturday, March 24, 2018. Born on September 29, 1985, in Plattsburgh, N.Y., Brian moved to N.H. at a young age.
It's been said that Brian lived more in his 32 years than most people do in a lifetime. His larger than life personality attracted people to him and left a lasting impression. He will never be forgotten for his beautiful smile, or his crazy sense of humor, and many were lucky enough to be embraced by one of his giant bear hugs.
Brian's job took him all over the country, including Puerto Rico where he met the love of his life, Jenisse. Brian's true joy came from the couple's son, Brice, who he was tremendously proud of and loved deeply. Family was important to Brian, and although he struggled, he wanted nothing more than to make his family proud. Brian's father instilled a love of the outdoors in both his brother, Scott, and himself. Many times were spent camping, hunting and fishing. Brian continued that love as an adult and was especially happy when it involved spending time with his father in Alaska.

"She said you're a ramblin' man

You ain't ever gonna change

You gotta a gypsy soul to blame

And you were born for leavin'"