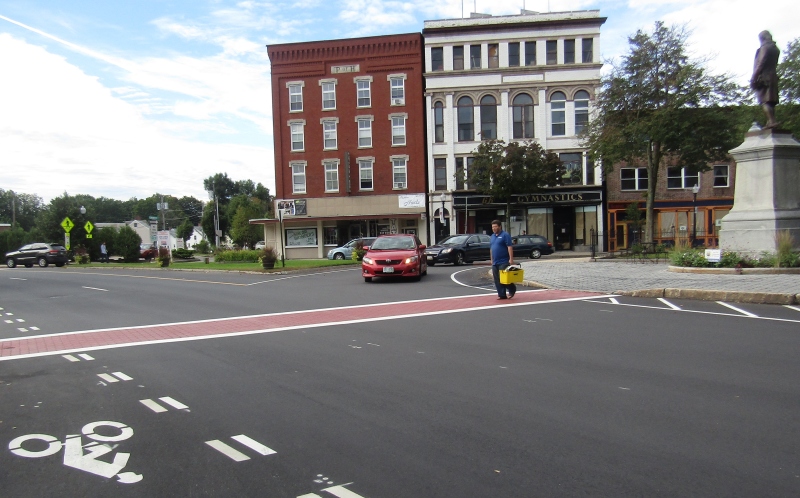 A city workers uses one of the new crosswalks to cross from Parson Main Square to Hanson Street last week. (Rochester Voice photos)

ROCHESTER - The last of 26 new red-brick sidewalks were installed in the downtown last week, culminating a months-long project to improve safety and aesthetics for motorists, bicyclists and pedestrians.

The improvements include striping to designate dedicated bicycle lanes, vehicle- and bicycle-shared lanes as well as handicap parking spaces.

Walker's finding, however, irked Deputy Mayor and City Councilor A Raymond Varney, who said if signs approved by the council are being taken down, it should come back to council instead of a decision being made at the Public Safety board level.

"This is willy-nilly engineering," Varney quipped.

Walker and fellow City Councilor and Public Safety Committee member Geoffrey Hamann then explained that the decision had been made to put up the large green and yellow crosswalk signs at three downtown crosswalks to gauge public sentiment before putting them up on all.

"This was public opinion, not a surprise," Hamann said.

After calling for a vote, the measure to remove the six signs that are currently on North Main and Union streets as well as by Parson Main Square was approved 7-3.

Voting against the measure were Varney, James Gray and Peter Lachapelle.

The decision to remove the signs was approved by the Public Safety Committee, 4-1.

While most public officials have voiced approval of the downtown project, some have said the signage and striping makes for signage clutter.

"People are going bonkers with markings on the road, just too many lines in too many places," Councilor Sandra Keans said at an earlier meeting. "People are overwhelmed."

Assistant City Engineer Owen Friend-Gray told The Rochester Voice on Wednesday that the primary purpose of the project was "traffic calming," which is "using striping, road geometry, or signage to slow down traffic and bring awareness to drivers of potentially hazardous situations."

Councilor Elaine Lauterborn was among those who agreed the crosswalk signs weren't necessary since the new red-brick crosswalks are easily seen as opposed to the previous design.

One agreement everyone seems to share is that the new red-brick crosswalks are aesthetically pleasing.

Friend-Gray said while the look is definitely brick, they are, in fact, made using a thermo-plastic stamped brick with a plastic 1/8-inch thick top that includes aggregate to make it more resilient to plows.

Friend-Gray said a total cost for the project was not available yet, but would be soon.