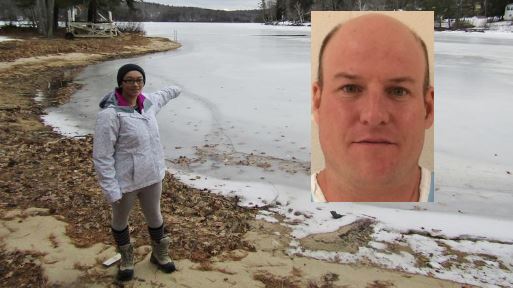 Nikia Wight of Townhouse Road points out onto Milton Three Ponds where suspect Jeremy Hovey Leclair along with several lawmen and a K-9 fell through. (Lebanon Voice photo)

MILTON - Little is known about why a Kittery man with his young son in his truck led police on a chase into Milton while often trying to force officers off the road, but what is known is a Milton Officer played a vital role in ending the pursuit, and a Milton resident assisted first responders after the suspect, several lawmen and a K-9 fell through Milton Three Ponds ice at the end of Townhouse Road while catching the subject.

Jeremy Hovey Leclair, 39, was to be arraigned on Friday in Strafford County Superior Court, but never showed. When his name was called by Judge Steven M. Houran, Leclair's public defender and a county prosecutor huddled at the bench for several minutes before Houran called for the next arraignment with no public discussion.

"I can say nothing," he said when asked for the reason behind the postponement.

Thursday night's bizarre chain of events began around 7:50 p.m. when New Hampshire State Troopers received information from Kittery Police regarding a 2001 Chevy 2500 pickup that had pulled alongside a Kittery Police cruiser and attempted to force it off the road.

The pickup truck then sped off after stopping briefly for the Kittery officer, however no pursuit was initiated.

A short time later the same vehicle was observed being operated in a reckless manner on Route 236 in Eliot where Eliot Police attempted to stop the vehicle, which again sped off.

After a similar incident occurred in Dover a short time later, police theorized that the driver was attempting to initiate a police pursuit by his aggressive driving.

Information was developed that identified the driver of the vehicle as Leclair, who had his 4-year-old son with him in the truck.

Around 9:30 p.m., the vehicle in question was observed by a Somersworth police officer on High Street. Simultaneously, Trooper Matthew Locke observed the vehicle and followed it onto Route 16 southbound. Locke attempted to initiate a motor vehicle stop, but Leclair reportedly moved his vehicle into the right breakdown lane, stopped briefly, and then again sped off. Locke continued to follow the vehicle from a safe distance and maintained visual contact. A short time later Leclair used an emergency crossover on the highway and reversed his direction onto Route 16 northbound.

Troopers continued to follow the vehicle from a safe distance until the vehicle approached the Rochester/Milton line when a decision was made to use a tire deflation device in an attempt to stop the vehicle by making it inoperable. Milton Police Officer Andrea Reid deployed the device and was successful in deflating the front right tire after which Troopers and local police officers followed the vehicle at slow speeds and from a considerable distance on Route 16 northbound.

The vehicle then exited the highway at Exit 7 and merged onto Route 75 east, then onto Route 125 north.

He immediately left the vehicle and fled on foot, running onto partially frozen Milton Three Ponds despite a local man walking his dog yelling to him that the ice wasn't safe.

But as Troopers Locke and Wilber ran toward Leclair and "Gauge" to take him into custody, the ice gave way and they all fell through.

Trooper Eric Call and Farmington Police Sergeant Brian Gore then ran onto the ice as well and helped pull Locke, Wilber, and "Gauge" out of the frigid Northeast Channel water.

Subsequently, Trooper Brian Ross retrieved a rescue rope from his cruiser, and Troopers Ross, Locke, Call, and Sgt. Gore threw Leclair the rescue rope and pulled him out as well.

Milton Police officer Brian Leahy had also arrived on scene and assisted all involved with taking Leclair into custody. Meanwhile, the 4-year-old child was removed from the vehicle by Reid immediately after Leclair fled on foot. The child was not harmed in any way.

Nikia Wight, a 17-year-old senior at Nute High, was just coming home from drama rehearsal around 10:30 when she saw six police cruisers outside her Townhouse Road home just steps from the lake.

"I thought they were doing some training or something, but after more cruisers, fire trucks and ambulances showed, I knew something big was happening," she said on Friday.

Wight, who said in all there may have been 20 or so responder vehicles on scene, said she had come outside to watch what was going on when an officer came and asked her if they had any blankets in the house.

"I grabbed five or six off the couch and brought them out to him," she said.

All the officers who had fallen through were treated at the scene by Milton Fire Department, while Leclair was transported to Frisbee Memorial Hospital for treatment then held at the Strafford County Jail.

Leclair was charged with two counts of reckless conduct, two counts of disobeying a police officer, two counts of endangering the welfare of a child, resisting arrest, willful interference with a police dog, and reckless operation. After his arraignment was postponed on Friday it is expected his arraignment will be on Monday, however official court records as of Saturday showed no indication of such. Strafford County Jail personnel today said he remains there on $10,000 bail.

This incident remains under investigation by Trooper Matthew Locke. Anyone with information pertaining to this incident is asked to call Trooper Locke/NH State Police/Troop A at 603-223-8490.