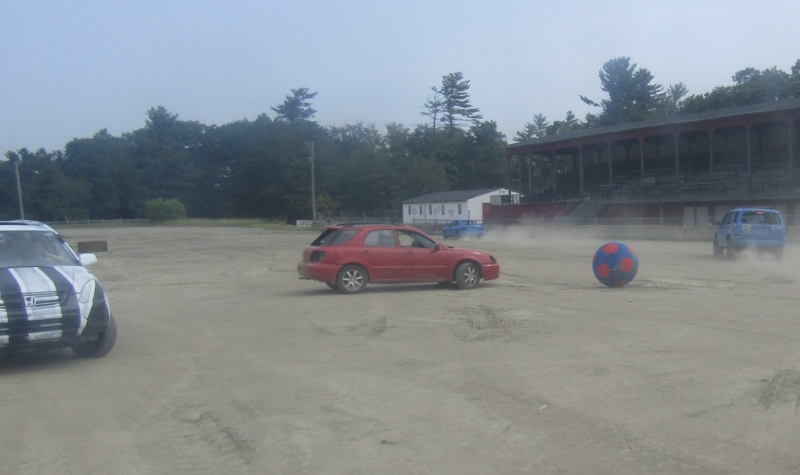 Dust flies as a Red Car team member tries to 'power' a Horseman Pride ball upfield during a practice on Wednesday in preparation of the Summer Showdown car soccer tourney on Saturday at the Fairgrounds. (Rochester Voice photos)

ROCHESTER - The players are cars, the goalies are excavators and the referee is a zebra-painted SUV.

It's car soccer and it's coming to the Rochester Fairgrounds for the first time ever on Saturday at 2 p.m.

On Wednesday several members of the four teams set to play on Saturday practiced the art of car soccer on a dusty dirt field laid out in front of the Fair's grandstands.

Ahead of rules meetings to be held today and tomorrow, driver/players discussed possible infractions and penalties.

"There will be some car to car contact, but we don't want too hard of a hit," said Bill Jones of Hall Bros. Roofing, a major sponsor of the fund-raiser. "Besides, we will be using some of these same cars for the Enduro race and the Demolition Derby, so we don't want to beat them up too much."

Jones said it was the first car soccer played in the Rochester area, and all the players were on a steep learning curve right now, but attendees can expect a good show.

"Oh, it's gonna be competitive," he nodded.

That became self-evident during practice on Wednesday as cars darted about jockeying for position and stirring up the dust as they tried to tap the ball toward the goal line against defensive pressure from opposing cars.

Watching them vigilantly was the "Zebra" SUV, which will hand out yellow cards on Saturday if cars make too hard a contact or any other unsafe moves. If they get a second yellow card "they'll go in a penalty box," Jones quipped.

With two teams of five cars each on the field at any time, "there's gonna be some action," Jones added.

The games will be played with large Horseman Pride balls, which are built to endure rough play, but the cars will also be equipped with skirts, scoops and rubber cushions on the front bumper to enable the sturdy, pony-tested orbs to hopefully survive the contests.

"Oh, I'm sure a few will get destroyed though," Jones said.

As an added fund-raising feature, if anyone wants to ride as a passenger in one of the soccer cars, it's just a $15 donation.

The four soccer teams playing on Saturday include Hall Bros. Roofing, Slam me in the Camry from Dan Gill Auto Salvage, The Buckmans and The Duvals.

After the car soccer is over there will also be an Endure race where speeds around the Fairgrounds track could get as high as 60-70 mph and a demotion derby for four- and six-cylinder cars. No trucks.

In an Enduro race, drivers often "tap" one another while jockeying for position, while in a demo derby, the object is to "take out" the other vehicles and be the last one running.

For those who want to be in the Demolition Derby or the Endure race but don't want to risk their own wheels, they can pay $100 to race a rented vehicle on Saturday.

Food and beverage including beer concessions will also be available when things get under way at 2 p.m. General admission is $10, with kids ages 5-10 $5 and under 5 free.

The event is a fund-raiser for the Rochester Fair, which this year will run from Sept. 12-22.

The Rochester Voice, a media partner in the event, will also be on hand selling annual subscriptions that normally cost $65 available for just $20.