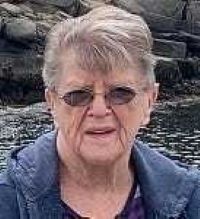 ROCHESTER - Catherine (Kay) M. (O'Connor) Reddington, 81, of Rochester, died on Sunday, January 10, 2021 at Wentworth-Douglass Hospital, Dover. She was born February 5, 1939 in Boston, the daughter of Cornelius and Margaret O'Connor of Killarney.
She was the beloved wife of the late Joseph F. Reddington Sr. Kay as everyone called her is survived by her six children. Donald Reddington of Manchester, John Reddington of Rochester, Kathy Reddington and Wendy Jones of Alamogordo, N.M., Joseph Reddington and wife Susan of Frisco, Texas, Michael Reddington and wife Catherine of Rye, and Danielle Reddington of Gonic.
Nana was the beloved joke playing, song singing grandmother to Joseph Kilbourne, Jace Phillip Jones Reddington, Cayla M. Reddington, Hayley E. Reddington, Zachary J. Reddington, and Connor M. Reddington.
Kay was the sister to Theresa Cameron and her husband, Harold of Hyde Park, Mass., Nancy Santheson of Hernando, Florida, Eileen Young of Milford, Mass., and the late Francis O'Connor, Mary Bennett, John O'Connor, Joseph O'Connor, Margaret Wyatt, and Thomas O'Connor.
For many years Kay, Joe and family owned and operated the Tri-Echo Motel and Cottages in Milton. The motel was more than a business it was a way of life. She met and befriended many people creating an extended family that reaches hundreds of families.
Kay has lived in Greenland, Barrington and Somersworth, Witchita Falls, Texas, finally settling in Rochester. In the past many years she has been spending her summers in Rochester, enjoying her family, the lakes and beaches. She spent her winters in Frisco, Texas as well as traveling the Eastern US in an RV. She was brave, strong, smart, and willing to take on any adventure. She embraced everyone with love, laughter, and compassion. Kay never met a stranger and she would light up any room she walked into. Her passions were many - family, bingo, puzzles, gardening and the Bawstun Red Sox.