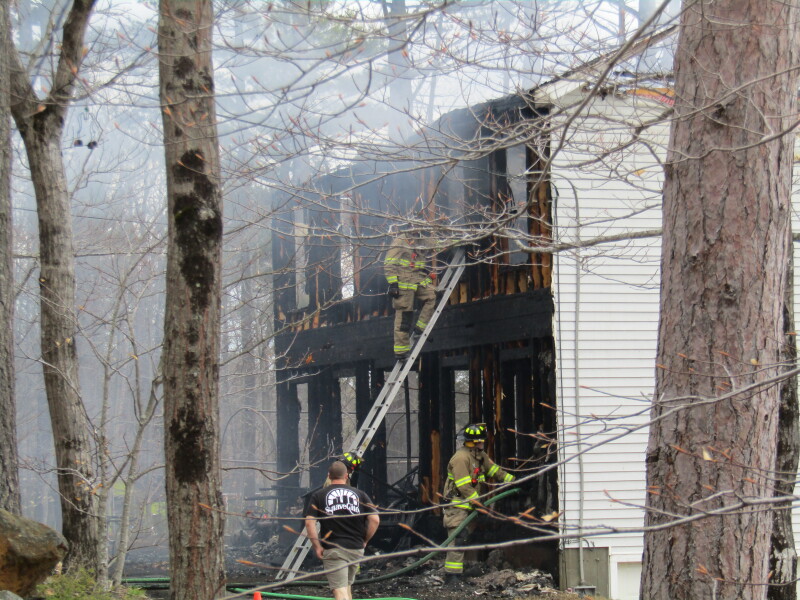 MILTON - A New Hampshire Forest Ranger reported on Thursday that the cause of a fire that destroyed a Milton home last Saturday was an improperly disposed cigarette.

Forest Ranger Tom Trask of District 31 said after a joint investigation with Milton Fire-Rescue it was determined that the fire started outside in a low lying brush area with leaf litter.

One person was sent to the hospital for evaluation after trying to vain to save a dog inside the home at 70 Mason Road.

The two-alarm blaze put firefighters to the test, first by having to negotiate rough portions of Teneriffe Road to get to the scene, and then having to battle gusty winds as the fought both the house fire and a threatening brush fire that blackened about an acre of land nearby.

The blaze was called in around 2:30 p.m. and led to a heavy mutual aid presence comprising firefighters from all over the region.

Milton Fire Chief Nick Marique said in the department's official press release that the first officer on scene reported a working fire with "extension to the woods."

He noted that forestry crews were also put in play protecting a neighboring home and containing the brush fire that was slowly encroaching upon it.

Trask on Thursday took the opportunity to plead with residents to please take care when disposing of smoking materials or having a campfire.

"It is a rough time of year, so please use caution and report fires immediately," he said.

Trask said the region is in a transition phase where buds are coming out.

"We are beginning to green up, but we haven't had enough rain and we didn't get enough snow over the winter," he said.

He said this has been a rough year for brush fires, noting the state had lost seven structures to brush fires this year compared to just one in 2020.

Trask said he was hopeful the snow and rain predicted today will decrease the fire danger.

Milton Fire said on Wednesday they would have no further comment on the blaze.