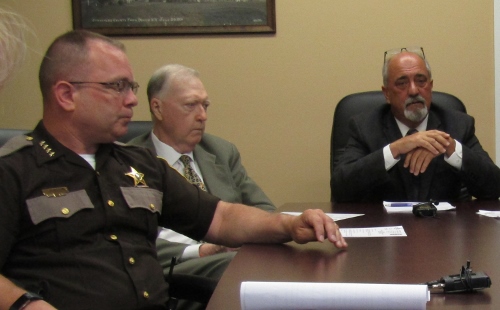 Leo Lessard, middle, at a County Commissioner's June press conference regarding a probe into drug use at the jail. Lessard remained active in his service to the public till the end.(Rochester Voice file photo)

MILTON - Strafford County Commissioner Leo Lessard, a Nute High graduate who went on to serve in the state legislature and as a Milton selectman, died on Wednesday morning at his home in Milton.

Lessard, 67, a longtime Democrat and progressive, had developed health issues of late. He left a hospital recently to spend his last days at home.

Lessard, who graduated from Nute in 1969, earned his bachelor's degree in general studies from the former College of Lifelong Learning.

He also served Milton as a selectman, moderator and on the Planning Board and Zoning Board of Adjustment.

Lessard served four terms in the state House of Representatives in the '80s and later in the Senate.

He was elected in 2012 as county commissioner, a position he held until his death.

"We are heartbroken to learn about the passing of Leo Lessard today," he said in a statement. "As a member of the N.H. House, former Senate Democratic leader, longtime Strafford County register of deeds and Strafford County commissioner to his last day, Lessard gave his entire life to the work of the Democratic Party, championing progressive values for generations. He was a legend of New Hampshire politics and he will be sorely missed. We send his loved ones our deepest condolences."

A memorial service will be held from 3 to 5 p.m. Saturday at the Nute High School and Library.