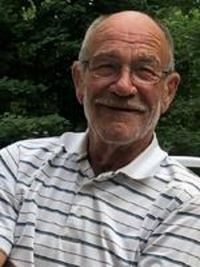 STRAFFORD - Charles (Chuck) Henry Fletcher Jr., 76, of Strafford, formerly from Laconia, died peacefully on Monday October 4th at home with his family by his side after a courageous battle with cancer.

He was born on May 23, 1945 in Laconia to the late Charles H. and Joan (Fontaine) Fletcher. Graduating from Laconia High school, he went on to enjoy a long career at Public Service Company of NH for 35 years, starting out as a meter reader, linesmen and then management. Upon retirement they then settled in Barrington to join the maintenance crew at Nippo Lake Golf Course, as he continued his love of golf. He was very involved with his children's lives whether it was maintenance and helping run ski jumping competitions or watching tennis from the sidelines. He loved his role as a grandfather and enjoyed many years of traveling with his wife Donna in their RV.

Charles is survived by his wife of 57 years, Donna (Mowers) Fletcher of Strafford, Daughter Wendy (Fletcher) Ring and Kurt of Andover, MA; Son Charles (Chuck) and Donna of Ashland, his grandchildren Dylan and Trevor Ring of Andover and Tayler Fletcher of Belmont. He also leaves a sister Judy Fletcher of Westbrook CT. He is pre-deceased by his sister Sandra J. Hoffman of Andover and Richard Fletcher of Fort Myers FL.