Chief Meehan should either resign or retire on Sept. 1 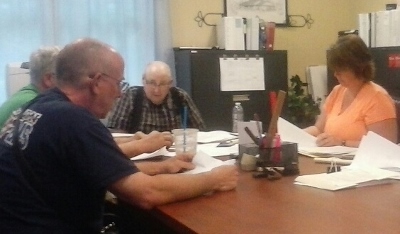 Lebanon Fire and EMS Chief Dan Meehan explains to selectmen that he'll be retiring if a budget containing his full-time salary is passed back on May 19. (Lebanon Voice file photo).

He should have retired from RFD on July 1, and he could've very easily had he planned ahead like department heads are expected to be able to do.

Selectmen, meanwhile, appear to either lack the chutzpah or the courage to force him to do what he promised he would back on May 19.

And folks, if he tries to tell you he couldn't retire on July 1 because he didn't know if the June Town Meeting would pass his budget that included a full-time annual salary of almost $48,000, he's lying.

He could have signed up to tentatively retire as early as April 1, according to the state retirement board. If the budget hadn't passed, he could have then retracted his retirement request from Rochester Fire on June 30 and continue his full employ there.

Right after the June 25 vote in which his budget passed we asked him when he was going to retire to which he quipped, "that's my business."

Actually you're wrong, Chief. It's Lebanon's business. And it's Lebanon residents' business, too.

Why? Well, we're going to explain it.

You said on May 19 that if you got the full-time job, you would retire from RFD and you'd be here for Lebanon 24/7. Unless you can be in two places at one time, that's not happened yet, because every shift in Rochester, whether it's 24 hours or 36 hours, is a shift you're unavailable to lead the department we're paying you to lead.

I know the attraction of seeing you monthly earnings go from some $7,400 to $8,600 must be alluring, but it's at the expense of those you serve. All the new uniforms in the world can't make it right.

We'd ask that you tell the people of Lebanon just what you think of them that you would perpetrate this fraud on them.

We understand that you won't tell this publication because of some perceived slight, when all we're doing is reporting the news. We're sorry that you're uncomfortable with that. So, do it on your Facebook Page, or website. Explain to us how it's all going down, Chief.

It's time to step up to the plate and stop your double-dipping. It's an insult to the people of Lebanon and denigrates your proud profession.

On Sept. 1 you can stop playing us for the country rubes you obviously think we are. We urge you to finally do it.