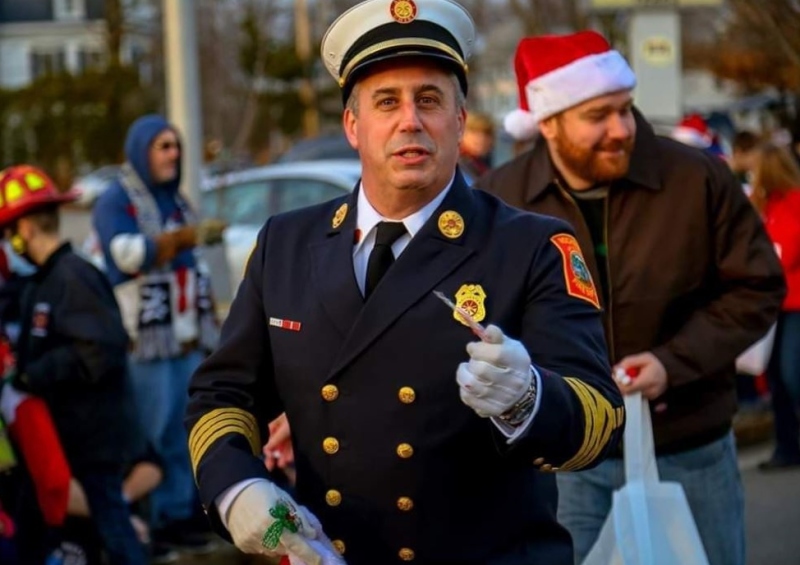 ROCHESTER - The timing of this year's Fire Safety Festival and parade could not have been more prescient.

On a day set aside to promote fire safety and celebrate the service and sacrifice of firefighters, Rochester Fire got to celebrate one of its own as longtime city firefighter and assistant fire chief Mark Dupuis got the fire chief job he always dreamed of having.

And there to drink it all in was Dupuis, himself, who told The Rochester Voice on Sunday that he was "overwhelmed" by the love, support and congratulatory hugs he received from colleagues and comrades during the festival.

"I was just so overwhelmed with the support the guys from Rochester gave me today and wishing me well," Dupuis said.

Dupuis received word earlier in the week that the town of Wells, Maine, had hired him to be their full-time chief, and word spread like wildfire on social media.

Dupuis said he had pretty much given up the idea of getting back into firefighting, working in property management since his retirement from Rochester Fire in June of last year.

"But then someone told me about the Wells job opening, so I decided what the heck and applied," he said.

Dupuis had thought he was in line for the Rochester Fire chief's job when longtime chief Norm Sanborn retired, but the city hired current Fire Chief Mark Klose, who previously was a Deputy Fire Chief in Bedford.

Dupuis said he liked his property management job at first, but after a while, realized it wasn't as satisfying as firefighting.

"It's funny," he said. "If I had become chief I never would have known how much they (fellow firefighters) supported me in this way."

Rochester Assistant Fire Chief Tim Wilder echoed those sentiments on Sunday, telling The Rochester Voice, "We are excited for him and it is well deserved."

Dupuis, who lives in Rochester, said he would be moving to Wells as that is part of his contractual agreement. He said the town of Wells is giving him six months to make the move.

Wilder said the festival's inaugural parade portion did well and he hopes it will have an even larger presence next year.

Klose was not in attendance as he was attending the 38th Annual National Fallen Firefighters Memorial Weekend in Maryland.