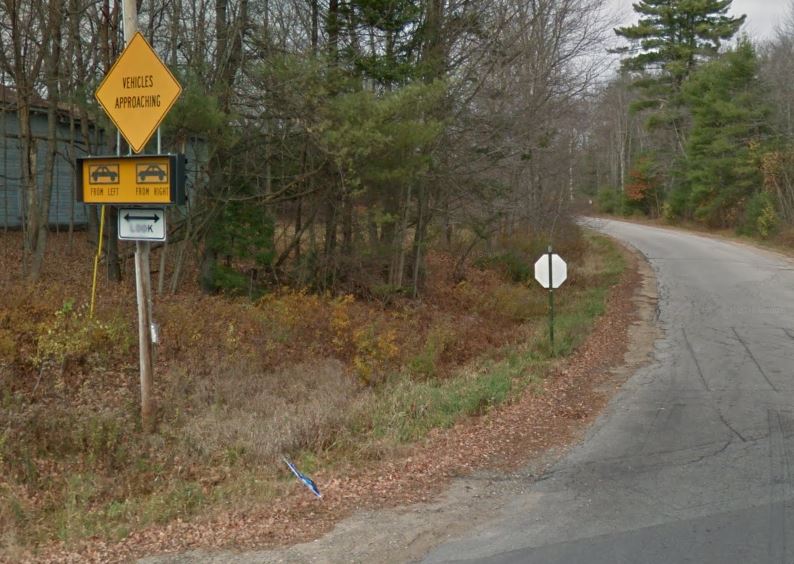 The blinking lights at the corner of Route 202, Center and Long Swamp road have long been a point of consternation for many motorists trying to navigate the intersection. (Google Earth photo)

LEBANON - Lebanon Selectmen Chair Chip Harlow said Thursday he thinks a circle might be the answer to making the intersection of Carl Broggi Highway and Center and Long Swamp roads safer.

"I actually think that a circle might work," said Harlow, who added the current flashing signs that electronically depict vehicular traffic don't work and are barely looked at, he suspects.

Selectperson Laura Bragg said she wasn't certain a circle would be the answer due to a deep curve prior to the intersection for westbound motorists, but welcomed any effort to make the intersection safer.

During the tenure of former selectboard chair Ben Thompson the notion of moving the entire intersection west was discussed, but the prohibitive cost led to little traction for any kind of initiative to develop.

The circle Harlow is suggesting would be similar to the one in Sanford at the intersection of routes 4 and 109.

Harlow said he would be discussing the circle option with state DOT officials to see what they think.

"I know a lot of people don't like it, and don't feel comfortable going there," Harlow said.

Print
Members Opinions:
mistysinclair
[Delete]
How about stop lights, wouldn't this be smarter? And less money and time?