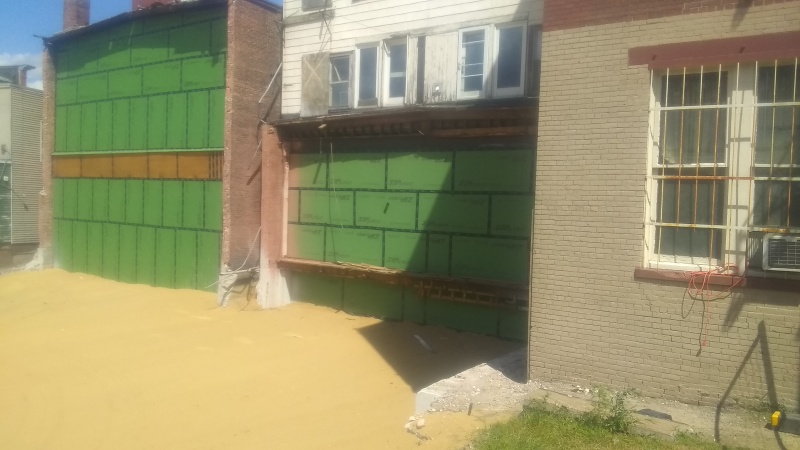 The rear of the two buildings have been demolished, paid for by taxpayers. (Rochester Voice photo)

ROCHESTER - Rochester's City Council on Tuesday unanimously passed seven years of tax relief for the Scenic Salinger blocks being developed by Chinburg Properties of Newmarket, but not before one city resident lambasted the council on what he characterized as a downtown development gambit.

"This is a gamble made on the backs of the people of Rochester," Steven Beaudoin said in an email read by City Manager Blaine Cox as part of a public hearing before the vote. "Especially in this economy when they're struggling to pay their bills."

The 79e tax relief package allows Chinburg to pay property taxes on the assessed value of the buildings - around $250,000 - for seven years, rather than on improvements, which are expected to total $8.4 million before it's completed in 2021. The buildings will comprise two 1,000 square foot commercial spaces in the front and more than 50 market rate apartments in the back and on upper floors.

Beaudoin estimated the city was giving up $2 million in lost revenue due to tax write-offs, fees that were waived, taxpayer-funded demolition and remediation and paving done on Water Street.

"Where is the benefit to the taxpayer?" Beaudoin asked. "How does this help the struggling middle class?"

Beaudoin also accused the city of making decision behind closed doors, but Rochester Mayor Caroline McCarley said that was anything but the case.

"This project has been going on a long time and all the discussion and votes on it have been in public," McCarley said. "Certainly negotiations aren't public, but this provides the downtown with what is needed and to have a developer come in and invest 8.4 million to have some good housing downtown and commercial opportunities I'm all for it.

"79e came in to give downtowns a chance to come back, and this is an opportunity we've been waiting on a long time."

But Beaudoin still isn't sold. He said in a recent letter to the editor that it will be somewhere around 13 years before the taxpayers break even on the deal.

Construction is expected to begin this fall.