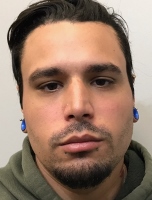 DOVER - An East Rochester man is facing up to 21 years in state prison for his alleged dissemination of sexual images of a female acquaintance.

Donovan J. Banks, 28, with a last known address of Milton Road, was indicted last month by a Strafford County grand jury on three such charges for sending three pictures of the victim's "fully exposed" nipples to another acquaintance on Sept. 19, 2019.

According to charging documents, Banks is accused of sending the images "with the intent to harass, intimidate, threaten, or coerce" the victim, who is identifiable from the images sent. They also state Banks "obtained the images under circumstances in which a reasonable person would know or understand that the person in the image intended that the image was to remain private."

Each of the three Class B felony charges carries a three and a half to seven year sentence and a $4,000 fine.

The Strafford County grand jury indictments were released to the public on Aug. 28.

An indictment is not an indication of guilt; rather that enough evidence has been gathered to warrant moving forward to trial.