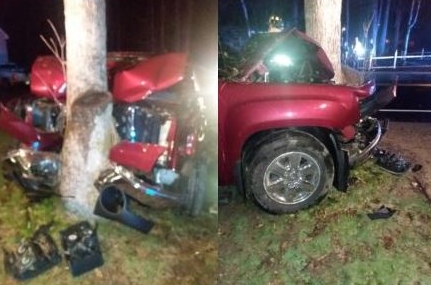 The truck sustained heavy damage and was towed from the scene. (Rochester Police photo)

ROCHESTER - A Rochester man was arrested for driving drunk and drug possession early today after his pickup truck crashed into a tree on Whitehouse Road.

The accident occurred in the area of 106 Whitehouse Road around 12:15 a.m. when police say a 2013 GMC 1500 operated by Ryan Cassavechia, 45, was travelling west on Whitehouse Road when it left the roadway and struck a tree head on.

Witnesses at the scene stated that the vehicle veered off the road suddenly before striking the tree. Cassevechia was transported to Frisbie Memorial Hospital with what were described as nonlife threatening injuries.

Officers then responded to Frisbie Memorial Hospital where Cassavechia was arrested and charged with driving under the influence-subsequent, drug possession and operating without a valid license.

Cassavechia will be arraigned in Strafford County Superior Court later this month.

If anyone has any information about this accident or investigation they are asked to contact Officer Brenden Bentz or Officer Cory Krochmal at 330-7128.