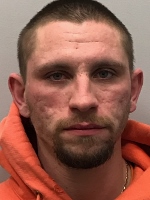 DOVER - A Rochester man is facing as much as 14 years behind bars in a domestic violence assault that occurred in Rochester last December.

Michale Carone, 28, of 28 North Main St., is accused of second degree assault for allegedly "holding a knife to (the victim's) throat causing a laceration" and saying, "I am going to kill you," on or about Dec. 22, according to court documents.

Both charges are Class B felonies that carry up to a seven year sentence.

The Strafford County grand jury indictments were handed down last month, the first month a grand jury was convened since the pandemic struck in March.