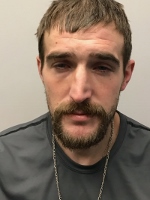 ROCHESTER - Police say a Rochester transient riding a bike in the downtown tried to elude an officer in a police cruiser by going down one way streets and on sidewalks on Sunday morning before other officers on foot caught up with him to take him in to custody on a receiving stolen property charge among others.

The bizarre incident unfolded around 9:05 a.m. when police received a call from Walmart regarding a case they were working on where a person of interest in that case had been in the store, but then left in a vehicle.

Walmart provided a description of the person and the vehicle to police, and soon after, an officer thought they noticed the vehicle in a driveway on Charles Street. As the officer noticed what they thought was the vehicle, a male from the residence also fitting the Walmart description rode off on a bicycle.

The officer then followed the person and tried to get them to stop, but the subject would not stop and kept riding away.

The officer was calling out for him to stop and had his blue lights activated however the male on the bicycle continued to refuse to stop, riding down one way streets the wrong way and on sidewalks so the officer could not follow him, according to Rochester Police Capt. Todd Pinkham.

Soon other officers in the area in vehicles and on foot located the subject and were able to detain him. The male, who was found to be currently out on bail, physically resisted officers and was eventually taken into custody on an active arrest warrant out of the Rochester Police Department for receiving stolen property as well as a capias from Superior Court and Electronic Bench Warrant out of District Court.

In addition to those preexisting warrants, the suspect, identified as Jonathan H. Dube, 34, was also charged with disobeying a police officer (for not stopping when told to), resisting arrest, contempt (for violating bail conditions) and two bicycle law violations.