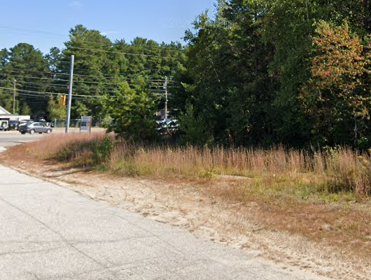 The property at 8 Amarosa Drive, some of which will be utilized in fashioning the new intersection. (Courtesy photo)

ROCHESTER - Rochester's City Council on Tuesday voted to move forward with the $270,000 purchase of vacant lots at 8 Amarosa Drive and 0 Milton Road to make way for the construction of a new intersection that will facilitate traffic where the two roads intersect with Salmon Falls Road.

The resolution required nine votes on the floor to pass, which it did easily with only Councilors Jeremy Hutchinson and Palana Belken voting no. Neither of them made any substantive argument about why they were against the purchase, however Belken did voice concerns over whether gun maker Sig Sauer had committed to pay fair market value for however much of the two properties were left unused after the new intersection was completed.

Rochester Mayor Caroline McCarley noted that Sig has, indeed, committed in writing to purchasing whatever property remains and to contribute $500,000 to the project, itself.

And while City Councilor Doug Lachance voted yes on the land purchase he also had major concerns regarding the impact the construction of the new intersection might have on small businesses nearby.

Rochester City Manager Blaine Cox told The Rochester Voice last month that the intersection improvement project has been on city officials' radar for some time, but the acquisition by Sig brought it to the fore. He said he didn't know what shape or from the new intersection would take since the engineering is yet to be completed.

Sig Sauer's world headquarters is located at Pease International Tradeport, and the company operates six additional locations across the state of New Hampshire, in addition to operations in Arkansas and Oregon.