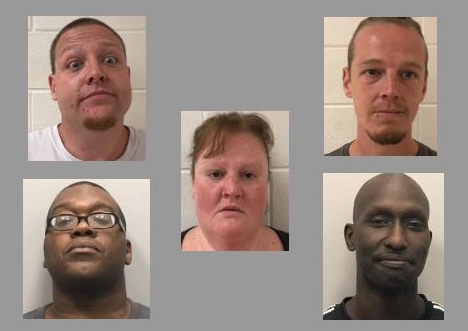 The Oct. 1 brawl on Heaton Street was part of a yearlong neighbor dispute that had drawn officers to the scene at least a half dozen times, Rochester Capt. Todd Pinkham said last week.

The melee led to the arrest of six people, but dispatchers were told by one reporting person that 10-13 were fighting with sticks, a bat and pepper spray during the 4:20 p.m. incident.

Marcus Pritchett, 38, of Dorchester, Mass., and Darcie Hibbard, 38, Adrian Hibbard, 35, Gary Hibbard, 36, and Perry Brown, 45, all of Rochester, were arrested and charged with felony riot punishable by up to seven years in prison.

Also arrested on three EBWs was Shawn Harriman, 35, of Rochester. Harriman's warrants were for criminal threatening, criminal mischief and false report to law enforcement. All the EBWs had been set on PR bail. He was present during the brawl, but has not been arrested in connection with the incident.

Pinkham characterized the department's response to the scene as including "quite a few cruisers and officers."

Pinkham said past incidents associated with the feud were logged in by police as for disorderly conducts, disturbances and neighbor disputes.