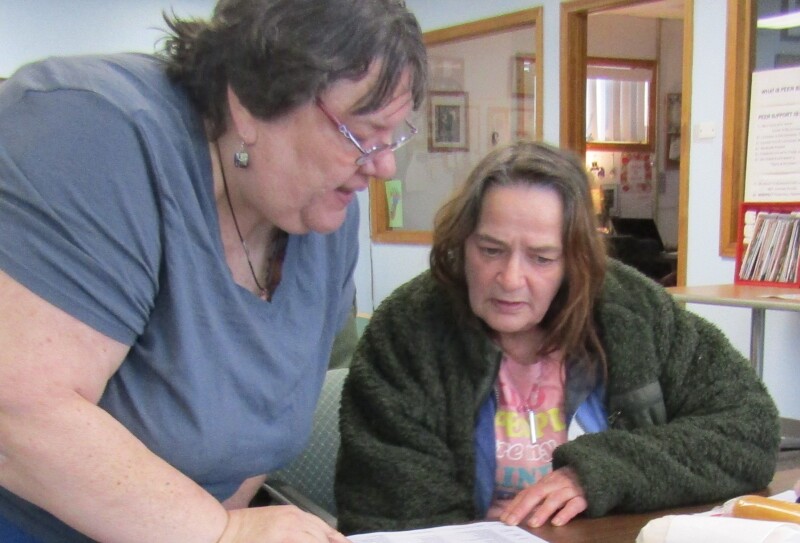 Infinity Peer Support Program Coordinator Carol Otash reads from a resource list as she confers with Kimberly Lucier, an area homeless woman who said she has embraced the homeless lifestyle for more than five years. (Rochester Voice photo)

ROCHESTER - Kimberly Lucier wasn't always homeless. She used to have her own beautiful home right here in Rochester, but about six years ago amid a family squabble, she ended up on the streets and she's been living there ever since.

Lucier was one of about a dozen or so hanging out at the recently rebranded Infinity Peer Support, which is located in the former Tri-City Consumers Action Co-op at 55 Summer St.

Infinity Program Coordinator Carol Otash said the rebranding began last May, as they sought transition from the former drop-in center to one that stresses more services including group and peer support for those suffering from mental health issues and seeking recovery. She said the transition was completed with a Greater Rochester Chamber of Commerce ribbon cutting earlier this month.

Otash said they serve many suffering from both substance abuse and mental health concerns, referring many to nearby SOS for recovery assistance.

They also help their clients with resources like signing up for welfare, food stamps and rental assistance.

All but one of the group spending time at Infinity on Thursday were homeless and spending nights at the recently opened Willand Drive Shelter in Somersworth, Otash said.

"They give us breakfast and dinner," she said. "It's all donated, usually subs or a sandwich."

She said they turn the lights out at at 10 p.m. and it quiets down, but not always as much as she'd like.

She said there were some trouble makers there who were kicked out, but they let them back amid the recent cold snap.

She said she has family in and around Rochester and lived with one of her relatives for a few weeks, "but I hated disrupting the household," she said. Originally from Compton, Calif., and a former Tyco employee, she said she has for the most part embraced the homeless lifestyle "as a loner."

"I like to live alone; I don't like to be around drugs or people," she quipped smiling. "But I've always loved to camp. We camped out on the Mad River in Northern California a lot as children."

While she has no qualms about remaining homeless, she said she's entertaining a notion to return to California now that she's approaching her 60s.

"I have enjoyed it, but I'm getting on now, and I have a daughter in San Bernardino who said she's building a room for me," she added. "I think I'll probably be leaving New Hampshire soon."

To learn more about Infinity Peer Support go to https://infinitypeersupport.org/