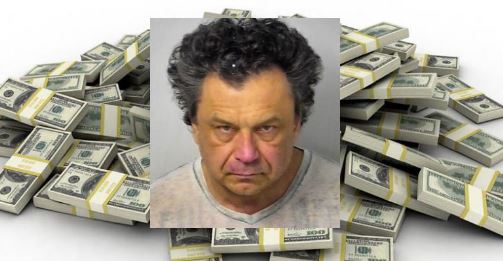 CONCORD - The state of New Hampshire may have botched a $14,000 civil forfeiture case against reputed Farmington drug dealer Dean Smoronk, but the feds are now getting a second bite at a different apple as they pursue a seizure of $10,000 cash found in a TD Bank safe deposit box in his name.

The charging document, filed on June 6, 2018, "alleges that the property was furnished or intended to be furnished in exchange for a controlled substance."

U.S. Attorney Robert J. Rabuck said today this latest civil forfeiture case has been put on hold till after Smoronk's meth trafficking case goes to trial in September. The stay request was agreed to by Rabuck in April.

An assent decree stipulating the reasons behind staying the civil forfeiture case reads in part, "Until the related criminal matter has been fully resolved, any continuation of this civil forfeiture case would seriously burden the Claimant's rights against compelled self-incrimination as guaranteed by the Fifth Amendment."

Smoronk, whose 979 Meaderboro Road home was the site of a double murder in January 2017, was indicted in the meth trafficking case on Jan. 9. The indictment accuses Dean Smoronk, 57, of trafficking in five grams or more of "methamphetamine, its salts, isomers, and salts of its isomers" between sometime in early July and July 12 of last year in "New Hampshire and elsewhere."

A jury trial has been postponed several times, but now appears on track for September in U.S. District Court in Concord.

The feds' attempt to seize cash in Smoronk's possession follows a failed attempt by the state two years ago.

In April 2017 the state of New Hampshire declared Smoronk a known drug dealer as part of its effort to seize more than $14,000 in cash found in his Farmington home. That petition was tossed out of court because the state was unable to get the forfeiture petition to Strafford County Superior Court on time.

State Police seized the cash on Feb. 3, 2017, after it was found during the execution of a search warrant at Smoronk's home.

According to court documents police found $10,318 in cash in two separate pouches of a black carry-on bag in the basement and found another $3,828 in a red, white and black flower bag in the master bedroom.

However, it wasn't until April 3, 2017, that the forfeiture petition was mailed - not delivered - to the Strafford County Superior Courthouse in Dover, resulting in its being filed on April 5 when it was received around 5 p.m., a day after the 60-day time window for such a notice.

The specific RSA that dictates the time frame is (318-B:17b). It states, "The department of justice shall, within 60 days of the seizure, file a petition in the superior court having jurisdiction. If no such petition is filed within 60 days, the items of property interests seized shall be released or returned to the owners."

Rabuck said the Federal Civil Asset Forfeiture Reform Act is not bound by the same constrictions as the state.

Court documents indicate the civil forfeiture case will be decided in a jury trial.

Smoronk has never been implicated in the killings, however he does have a record of drug involvement, including the arrest in South Carolina with his now-deceased girlfriend in 2014; and in June 2017 when he was arrested on Interstate 95 in Virginia for drug possession.

He returned to New Hampshire last June a couple of months after his release from a Virginia jail.

A week later at a probable cause hearing in U.S. district court it was determined he should be held without bail. He is being held at undisclosed location, prosecutors have said.

The feds dropped the weapons charge in January.

Sentencing guidelines on the most recent drug indictment weren't available.

Meanwhile, longtime Smoronk associate Timothy Verrill, 36, of Dover, who is accused in the deaths of Sullivan and Pellegrini, is expected to have his trial in September in Strafford County Superior Court.