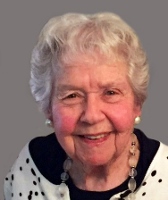 DOVER - Claire T. (Flanagan) Papatones died peacefully in her sleep on Saturday, July 25, 2020 at her daughter's home. She was born on January 28, 1925 in Somersworth to James and Ann (Morin) Flanagan. She was the widow of Alexander ("Pap") Papatones, and is now happily reunited with him.
Claire was a loving, fun, sociable person who made everyone around her feel special. Nothing pleased her more than being with family and friends, whether to celebrate an occasion, play cards, share a meal, golf, take a walk, enjoy the beach, attend a show, or simply chat and laugh.
Claire grew up in Somersworth and graduated from Somersworth High in 1942. She worked at the Internal Revenue Service in Portsmouth before her marriage, raised her four daughters, and worked in the Somersworth school system from 1965-1985. She retired as the secretary of the Somersworth Middle School in 1985; a position she held for 17 years and recalled proudly for the rest of her life.
She married Pap, her high school sweetheart, in 1947 and enjoyed 65 wonderful years with him. Her married life began in the Army, where she loved being an officer's wife. She fondly recalled those eight years and relished her Army friends throughout her life. She and Pap moved back home to Somersworth in 1955 to raise their family.
Claire was the best mother/grandmother to her four daughters, six grandchildren, and four great-grandchildren. She encouraged their creativity, supported their individuality, welcomed their friends, guided their decisions, and had the right balance between joining their games and letting them be independent. She also made the best kool-aid in the neighborhood.
She summered at her parents' cottage at Wells Beach, Maine from childhood through the 1960's. Dances and parties in her teen years gave way to organizing cookouts, bonfires, and sing-a-longs as an adult.
Claire was a member of Cocheco Country Club for 50 years, where she played golf, bridge, and enjoyed the social activities. She continued to meet her friends to dine at CCC on a regular basis well into her nineties. She cherished those events.
Claire was predeceased by her husband Pap (2012); daughter Cathryn (1983); brothers Donald, Gerald, Jerome, Richard Flanagan; and sister Ann Donovan.
She is survived by daughter Lynne and son-in-law Sonny Gauthier of Milton, daughter Jan and son-in-law Ron Crowley of Dover, and daughter Beth Wheland of Rochester. She also leaves her six grandchildren, four grandchildren-in-law and four great-grandchildren as well as cousins, nieces, nephews and friends.
Claire will be dearly missed.