Clemento's Pizzeria & Brew: Where everyone knows your name 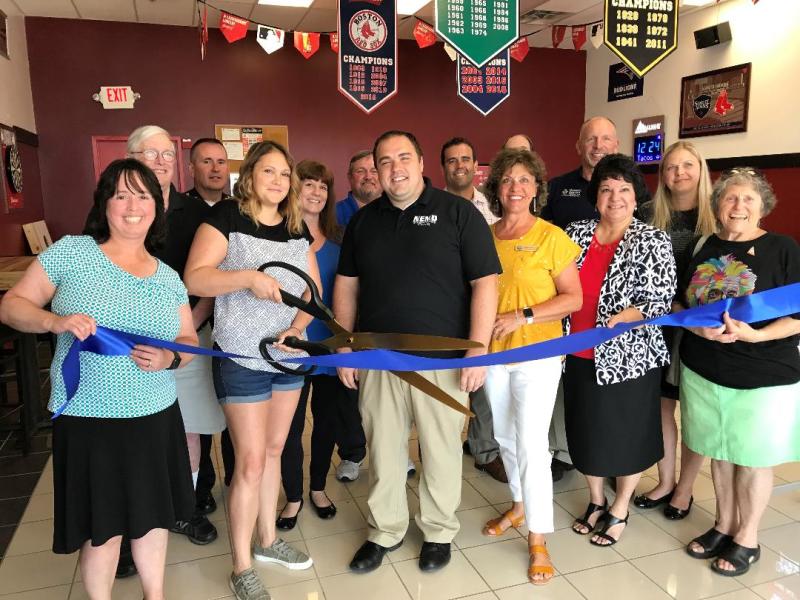 ROCHESTER - If you want a watering hole where the pizza has some pizzazz, where socializing includes playing grownup games and where everyone knows your name like Ted Dansen's "Cheers," than look no more.

Clemento's Pizzeria & Brew is for you.

Ben Lowe of Lee, who along with Mike Magurk, bought the eatery 16 months ago, hosted a Rochester Chamber of Commerce ribbon cutting on Tuesday to celebrate the improvements they've made to both the menu and amenities customers can enjoy.

"We are looking to serve what we call 'really good barfood,'" Lowe told The Rochester Voice, adding since they took over last year they'd improved their wings, the bread they use for hot subs and their pizza options.

He said what makes their food taste so good is it is stone-cooked in brick ovens.

Customers' pizza favs include their "Heaven and Hell", which is half buffalo style-half barbecue chicken; and their chicken Alfredo, made with chicken, an alfredo cream sauce with garlic and cheese.

They also make a white pizza for those that don't like marinara sauce and a gluten-friendly pizza that is made with gluten-free ingredients. Lowe said they call it "gluten friendly" because there could be a little cross-contamination inside the brick oven.

Clemento's is also well known for its hot subs including but not limited to their hot meatball sub and their shaved steak sub.

But man does not live by bread alone, so Clemento's took over the storefront next door and turned it into a game room.

"We wanted to make it into a playground for adults," Lowe said.

So now customers can shoot some pool, play Beirut, darts or a special oversized bar jenga game. Everything is free to play except for the pool which costs just a buck.

The bar and playroom also feature projection TV which is projected onto a wall. Lowe said the picture quality can be a little cloudy during the sunlight of day but looks totally HD for nighttime Red Sox watching.

"We're really what you call a blue collar sports bar," he said. "We cater to blue collar, working class adults who don't want to come to a bar to just grab a beer. They want to have activities to engage them."

Lowe said one of the things he likes best about his clientele is the "Cheers-like" closeness.

"I know by name probably 90 percent of our clientele, they're regulars," he said. "And when people come in on a Thursday or Friday, everyone yells when they come in the door, 'Hey, how you doing?'"

Clemento's is located at 160 Washington St., in the Rochester Crossing shopping plaza that includes Kohl's and Lowe's.