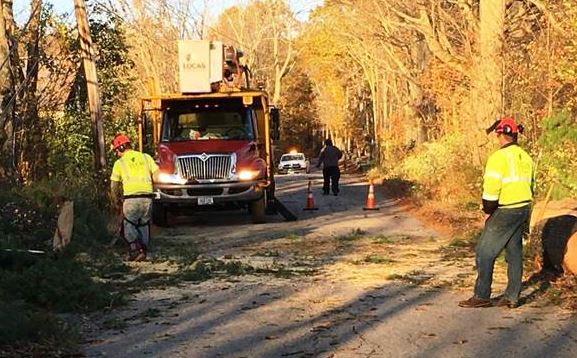 In what Central Maine Power officials are calling a more daunting task than the ice storm of 2008, power restoration and tree crews will be fanning out across the state and York County today in an effort to bring power back to an estimated 370,000 homes with no power.

While the numbers aren't as grim in Rochester and Milton, utility crews here face the same challenge, continuing to clear branches and debris from the road enough so that power crews can safely get to the wires that need to be reconnected.

Monday's goals were modest, but all important and achieved, according to Gail Rice, CMP spokesperson.

"We achieved the goals we set for today to make downed lines safe and return power to critical customers, while restoring service to more than 30,000 customers in the process," she said Monday afternoon. "We will have people working through the night on storm damage, and with additions to our crew count, we expect to make considerable progress on restoration tomorrow."

Lebanon is still the hardest hit in the region with 2,600 of 3,100 CMP customers still without power as of 7 a.m. today.

Milton, meanwhile, still has a third of its residents in the dark, with 800 Eversource customers without power. In Rochester about 1,000 customers await restoration.

No injuries were reported due to the storm damage, however one Milton family of three adults and one child were being assisted by the Red Cross after their residence on Pineland Park Road was made inhabitable when a tree crashed onto it.

Rice noted Monday's progress came despite difficulties getting access to many areas due to downed trees and flooded roads. She added that damage from the storm is unprecedented.

"This storm left us with the largest number of outages in the company's history, even higher than the 1998 ice storms that many of us remember," said Rice.

The workforce rose to more than 1,000 field personnel, including tree clearing crews plus line and substation repair crews, supported by safety, logistics and other personnel. CMP continued its outreach for additional crews despite the high demand from utilities throughout New England and eastern Canada. The company expects the next wave of almost 500 additional line and tree workers to arrive tomorrow with more to follow from as far away as Illinois, Kentucky, Ohio, and West Virginia.

Recovery from the storm could take at least a week in some areas. The company expects to provide a better timeline for the recovery by late today.

"Our crews are working as quickly and safely as possible, and we ask people to refrain from approaching them with questions that can slow their work and create safety concerns," said Rice. "We encourage customers to go to our website for restoration updates, and let our crews focus on safety as they go about their tasks."