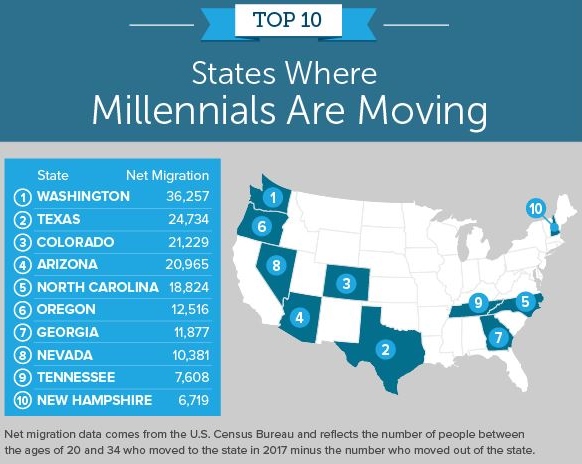 It appears millennials are finding the Granite State a rock-solid place to live and work.

In a recently released report the finance website SmartAsset found that New Hampshire was the 10th most popular state for millennial migration, with Manchester listed as No. 20 among the city migrations.

Washington state remained in the top spot for the second straight year.

Bucking a national trend toward millennials migrating south and west, New Hampshire was the only state in the northeast to make the top ten.

Governor Chris Sununu, reacting to the report, noted that New Hampshire's attraction to young people comes from an abundance of quality employment opportunities and its recreational assets.

"New Hampshire is the most desirable location in the Northeast for millennials to call home - a direct result of our booming economy, strong workforce, and educational opportunities," he said on Thursday. "Young Americans are attracted to our live free or die spirit, good paying jobs, incredible outdoor recreation opportunities, environmental stewardship, and offering the best work-life balance there is."

According to Smart Asset, New Hampshire had a net millennial in-migration of 6,719 people, or .50% of the state's population, the 10th best net number in the country.

To calculate which cities and states millennials are moving into, SmartAsset compared 2017 Census Bureau migration data for 173 cities and all 50 states, as well as Washington.

The report found that Dallas, Texas, was the top city for millennial migration.

It can be viewed in its entirety at https://smartasset.com/mortgage/where-millennials-are-moving-2019.