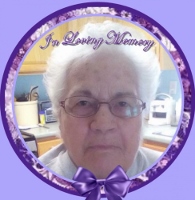 ROCHESTER - Constance J. "Connie" Wallace, 83, formerly of Tara Estates, died on Tuesday, November 13, 2018 at the Studley Home. She was born July 27, 1935 in Oak Harbor, Ohio, the daughter of the late Miles A. and Martha J. (Barris) Molesworth.
She was a homemaker and had worked in the copy center for Xerox of New Jersey. Connie has resided in Rochester since 2013 previously living in Warner. She was a member of the First Church Congregational of Warner. She enjoyed sewing and quilting.
The widow of John N H Wallace; she is survived by daughters, Janet Wallace Berube and husband Michael, Roseann M. Wallace Benoit and husband Scott all of Rochester; grandchildren, Dusty Dawn Pence, Shawn E. Benoit, Leland John Pence, Shannon M. Benoit Wiltshire and husband Richard, Michael L. Berube II; several great-grandchildren. She was predeceased by daughter, Myra Jane Wallace Pence, son, John N H Wallace Jr., and grandson, Robert A. Berube, II.