Corrupt politicians, a complicit press takes us to a very dangerous place 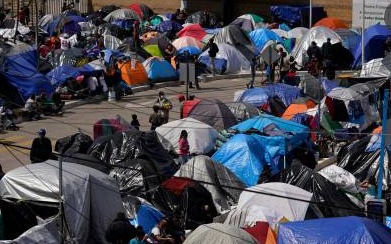 JUST DAY TRIPPERS: Sure Kamala, you're right. There is no border crisis. (Newsday photo)

Last week Kamala Harris finally visited a southern border town - El Paso, Texas, which is miles away from the real border crisis. That visit was nearly six months after the Biden Administration canceled effective Trump immigration policies thereby creating the crisis on our southern border. During that visit, Kamala stated that progress has been made. That is an absolute and total lie. The only real progress that has been made is the cartels getting richer as they traffic human beings and drugs into the United States.

In May, for the third straight month in a row, apprehensions at the border have exceeded 170,000 which is more than all of 2020. More fentanyl in greater amounts has crossed the border and is making its way throughout the country. Some human traffickers have been arrested. The cartels continue to get rich while families are torn apart in their homeland and suffer the dangerous journey at the hands of paid criminals. While some individual criminals have been apprehended, the "got aways" are unknown.

Brietbart news reporter Katherine Hamilton states, "In the past few days, the Biden Administration has been attempting to shift crime wave blame onto Republicans by accusing them of "defunding the police" -- despite evidence to the contrary."

"Despite an attempt to change the narrative, the facts speak for themselves: Democrats have been rallying to defund the police for more than a year, and simultaneously, crime has drastically risen in America's biggest -- Democrat-run -- cities.

Even though violent crime has risen significantly in the past year, Democrats are still calling for the defunding of police departments around the country:

What is at stake with the Democratic Administration and liberal media political lying? An article appearing in the Markkkula Center for Applied Ethics at Santa Clara University addresses the dangers of political lies and can be summed up in the following comments.

The harm of a lie must be viewed not only from the motive of the liar, but also the impact that it has upon the deceived. Lies not only compel a person to narrow his or her field of choice but give rise to power taken away from the people being lied to. Power accumulates over the course of repeated lies.

Political lies are not limited to the politicians. News outlets in the United States are owned and operated primarily by six companies--GE, Newscorp, Disney, Viacom, Time Warner, and CBS -- not to mention social media platforms of Facebook, Twitter, and You Tube. Those six companies and social platforms literally control nearly everything we know and do not know. Where are the checks and balances and what will happen if this continues? (Lindsay Solper, Propaganda In Today's Media)

The liberal media and Democrats installed Joe Biden by burying the Hunter Laptop story shortly before the election and with lies since 2016 too numerous to list in this short letter.