Could body scans be in the cards for guards? 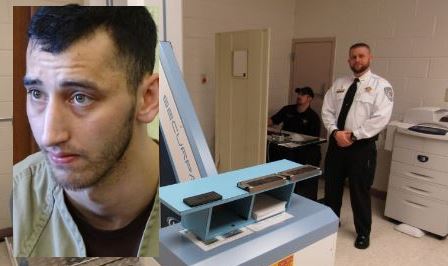 No firm decision has been made or is even in the works, he said, but after a corrections officer was charged with trying to smuggle drugs into the inmate population earlier this week, "It's something we may consider, something I should consider," he said on Friday,

Bryant Shipman, 25, of Rochester, who had worked at the jail almost two years, was arrested as he arrived for work Wednesday carrying what is believed to be $2,000-$5,000 worth of suspected fentanyl or heroin and cocaine.

Since Strafford County House of Corrections is a no-contact facility, the only way drugs can get in is through the mail, work release inmates or guards.

Brackett said there are numerous safeguards in place to make sure mail is thoroughly checked, so he doubts much if any gets in that way.

But he also believes his corrections officers are by and large reputable employees who would never consider doing such a thing as Shipman is charged with.

"I don't think that his portrayal of a correction officer is an accurate portrayal of those who work here," Brackett said.

County Attorney Tom Velardi, who is personally prosecuting the case against Shipman, said on Thursday that more arrests may be forthcoming as a three-month probe into drugs being smuggled into the jail continues.

This arrest was as a result of a joint investigation conducted by the Strafford County Sheriff's Office, Strafford County Department of Corrections and federal partnerships with the United States Marshals Service and ICE.

The x-ray machine used by the jail is called a Secure Pass, an x-ray monitor similar to a TSA airport scanner.

One of the major ways those being processed for intake try to take drugs inside the jail is in a body cavity, Brackett said during an interview earlier this year. Since jail personnel do not execute body cavity searches, the Secure Pass is vital in drug detection.

The Secure Pass was purchased by the county on a five-year lease sale agreement for about $35,000 a year, Brackett said, and is an invaluable tool.

Up until now, the jail's policy was to reserve the right to x-ray corrections officers, but not without a "compelling reason," he noted on Friday.

Conditions for release include being monitored by a GPS ankle bracelet.