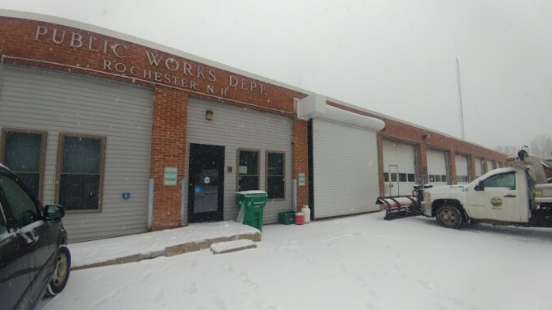 Will the former DPW headquarters soon be home to affordable housing? (Courtesy photo)

ROCHESTER - First, let's be clear. No one at Tuesday's public hearing stood up to cheer the City Council's decision to force spot zoning on several parcels in the area of the former DPW complex on Old Dover Road.
Three residents spoke out against it and two more sent emails rejecting the proposal, including former deputy mayor and longtime city councilor Ray Varney.

Even though Varney's email gave important historical perspective to why the area was zoned industrial, City Manager Blaine Cox - for whatever reason - deemed the public had no need to hear such valuable insight.
Again, like was the case in Gonic, the show goes on behind closed doors to foist upon the city of Rochester unwanted stack n pack housing that taxpayers are subsidizing to the tune of a $100 million through Sununu's InvestNH fund.
So why are our tax dollars going to construct affordable housing complexes? A couple of reasons.

One is if you offer them money they will come for it. Building contractors can gets huge subsidies that help pay for their multi-unit apartments houses, which gives them a better return on investment.
Secondly, if you let government get into a game, they will. Just like the city of Rochester is getting into the child care business and operating like a nonprofit with its community health coordinator, it is all-too-happy to assist the governor in cramming a few behemoth apartment complexes down our throats.
Which is where economic development director Mike Scala comes in. You might not know it but Scala, in addition to his charge of growing the city's economic engine - like manufacturing and retail - was also recently appointed to Gov. Chris Sununu's New Hampshire Housing Board of Directors.
At the public hearing Scala told City Councilors nothing had been signed and nothing would be proposed that wasn't right for the "tenor" of the community.
But don't forget that the city thought the 180-apartment complex at the Gonic Brickyard was obviously in "tenor" with Gonicians.
And they couldn't have had it more wrong.
But what about Mr. Scala. Whom is he working for here.
The city? The residents? The governor? The housing board?
How many masters can he serve?

During Tuesday's public hearing Scala said housing would be a perfect fit for the former DPW site.

"The use that would be most beneficial (there), in my eyes, would be the development of housing," he said.

Scala never spoke to what education, expertise and training his opinion is based on, however.

The City Council will likely vote on this at its Feb. 7 meeting, but prior to that the planning board will take the matter up on Monday at its 6:30 p.m. meeting.
It may be the last time the public gets a chance to put in its two cents on what could be another mega apartment complex Gonic Brickyard 2.0.
The language of the city's proposal says it "ordains" that the rezoning be effected.
We don't actually know what the planning board's role is, now that the spot zoning has been "ordered."
Tom Kaczynski, a state rep for Strafford 5, said the city recently spent three years to determine zoning across Rochester and came up with a plan.
"Now they want to change it when this is a prime area for an industrial zone," he said. "This is foolish. They're not allowing room for industrial development. And building houses is not economical development."
Kaczynski also fears the city will aid developers further by perhaps razing the buildings, doing prep work and even mitigation of environmental hazards that could be near the former DPW property.
Meanwhile, Rochester's mayor and city manager both refused to comment on the city's practice to not read residents' public comment emails into the record at public hearings.

The Voice made a Right to Know request for whatever city documents might show by whose authority it was decided not to read emailed public comments for a public hearing. City attorney Terence O'Rourke replied that there were no relevant documents that applied to my request.

What a slap in the face to those who foot the bill.