Darius "John" Davis ... was Jaycees Man of the Year 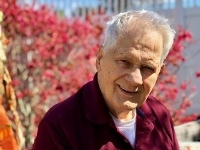 ROCHESTER - Darius "John" James Davis, 86, died Tuesday, September 8, 2020 in his home with his family by his side. He was born in Newport, the son of the late Roland Davis Sr., and Irene (Godfrey) Davis.
John proudly served in the Army for 5 1/2 years. Following his service, he was an accountant for Maxfield Riel, then worked for CI White for 35 years.
He coached softball for the Rochester Softball League, was President of the Rochester Jaycees and received Jaycees Man of the Year Award and the Jaycees International Senator Award. He held the position of finance officer for the American Veterans and served eight years as treasurer for the Victoire Club. He loved volunteering for the Pease Greeters and especially loved going to the nursing homes to have lunch with other veterans.
John loved dogs, volunteering for the AMVETS, playing softball, playing Pinochle with his friends, the "Exhausted Roosters", and spending time with his family. He had a big heart and quick wit sense of humor.
He was predeceased by his wife of 61 years, Paula Davis, his daughter Denise Warren, his brother Roland "Peter" Davis and sister Linda Davis.
Survivors include his children Donna Keelty, Dana Davis, Diane Nicol, Debbie Davis, Darcy Graham, and Deanna MacDonald; his grandchildren Lance Keelty, Tyler Davis, Alexis Nicol, Isabella and Evan Graham, James Davis, Nikki Warren, Taylor, Emilie and Sydney MacDonald; as well as seven beautiful great-grandchildren.
He will be dearly missed as a father, grandfather, great-grandfather and friend.