Days before bank robbery, it appears David Perkins was begging to get into rehab 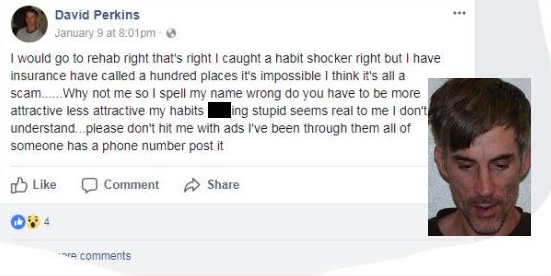 ROCHESTER - Just four days before he is alleged to have walked into Holy Rosary Credit Union's main office and handed a teller a note demanding money, David Perkins of Rochester was on Facebook begging someone to give him a number that would help him with his addiction.

In a sometimes garbled, incoherent post, Perkins, 46, seemed to be telling friends he was at his wit's end trying to get into a residential program.

"I would go to rehab right that's right I caught a habit shocker right but I have insurance have called a hundred places it's impossible I think it's all a scam....," he wrote. "Why not me so I spell my name wrong do you have to be more attractive less attractive my habits f---ing stupid seems real to me I don't understand...please don't hit me with ads I've been through them all of someone has a phone number post it."

A longtime acquaintance of Perkins who on Jan. 9 urged him to go get help immediately said today he had been battling drugs for some time, but appeared to have gotten straight in the past two years.

Jane Dilboy Turner, a lifelong resident of Rochester who grew up with Perkins, said she knew he had been on the wrong side of the law in the past a few times, but that she never would have thought it would escalate to this.

"He was a great person, he would give you the shirt off his back," Turner said. "He could be very funny and upbeat, a really good guy.

"When my mom was in the hospital from a car accident when we were both young, he was always there for us."

She said they were really close for years, but then he got married and they drifted apart but remained Facebook friends.

Turner said that about a year ago he called her and said he was living in Manchester at a halfway house and that he was getting himself straight.

That's when she realized he'd gotten into drugs.

"But he sounded great," she said. "Like he had it together."

But when she saw his post on Facebook earlier this month she realized he was back in trouble with drugs yet again.

I bet he called a lot of people looking for help," she lamented. "When people need help with drugs they need it now."

Perkins, formerly of 479 Gonic Road, was arrested for unarmed robbery, a Class A felony, on Friday.

The arrest was made at the Strafford County Jail where he was being held on a probation hold from a separate charge.

Turner said Perkins as a child had lived in Milton, but moved to Rochester as a teenager and lived on Ela Street. His Facebook page lists East Rochester as home.

Turner said Perkins was often in trouble with the law and poor, but remained a good person, adding that drugs like heroin and fentanyl can make people someone they're not.

"People don't wake up and say I want to live on the streets," she said. "I've seen a lot of good people that I know die of heroin."

Turner is actually now studying to hopefully someday work within the criminal justice system to help those on probation get their lives back on track with a good job and a drug-free existence.

But she said the magnetic pull of heroin addiction is a ferocious one.

"I know one girl, she overdosed and was in a coma for six months at a Massachusetts hospital," she said. "They wanted her parents to pull the plug but they wouldn't. Later she woke up from the coma with a full recovery. She'd lost only a little memory.

"Within a week she was using again. She died a couple of times just last week, but was brought back with Narcan."

Turner said she was still trying to help the woman, who is from Rochester, but she's fast running out of friends.

"In this country New Hampshire is number one for heroin addiction, but we're way down the list for funding," she said. "Sometimes there's a six-month waiting list for a residential program."

Meanwhile, Perkins, who remains at Strafford County Jail on $100,000 bail, will make his first court appearance at an arraignment on Monday.