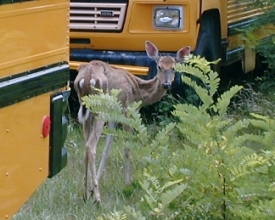 The NH Fish and Game Department is asking hunters to do their part in the effort to keep the state CWD-free by not using natural urine-based deer lures and following state restrictions on importing carcasses from CWD-positive jurisdictions.

Chronic wasting disease is a neurological disorder that is always fatal to white-tailed deer, moose, mule deer, elk, and other exotic cervids (members of deer family). Currently it is not believed that CWD is transmissible to humans; however, hunters are still advised not to consume animals that may have CWD.

Deer Biologist Dan Bergeron recently received results from a federally certified veterinary diagnostic laboratory that indicate that all the deer tissue samples taken during the 2017 New Hampshire fall hunting season tested negative for CWD. In 2017, a total of 444 tissue samples from hunter-killed deer were tested by Fish and Game, with significant support from the U.S. Department of Agriculture Wildlife Services in Concord.