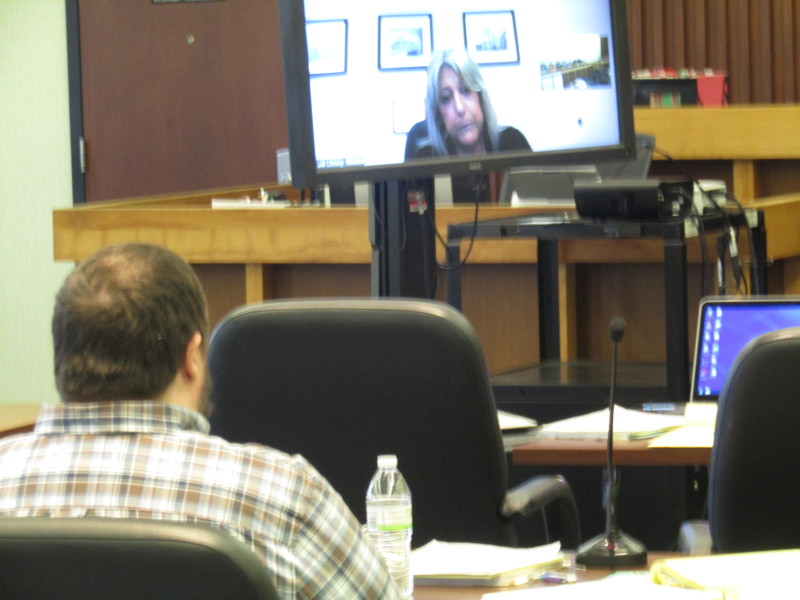 Timothy Verrill looks on as defense witness Christine Thurston testifies by live video feed from Florida that her friend, Christine Sullivan, told her in January 2017 she was packing and getting ready to leave her Farmington home. (Rochester Voice photos)

DOVER - A friend of both Dean Smoronk and Christine Sullivan testified on Wednesday to the enormity of the couple's drug trafficking operation, the growing tension between them and Smoronk's relief expressed in the weeks after Sullivan's death that he was off the hook with regard to a 2014 South Carolina drug arrest in which they both faced prison time.

Dan Wall, a heavy equipment operator from Milton, told defense lawyer Meredith V. Lugo that he became acquainted with Smoronk and Sullivan after doing some work at their Meaderboro Road home in Farmington, including installing a custom subfloor safe in the master bedroom where Smoronk often kept thousands of dollars in cash and drugs.

After becoming friends with the couple he became acquainted with Timothy Verrill, an alleged drug middleman for Smoronk who is accused in the brutal killing of Sullivan and her friend Jenna Pellegrini, 32, of Barrington, on Jan. 27, 2017.

Verrill, 37, is accused of first degree murder in their deaths. He faces life in prison without parole if found guilty.

Wall said he socialized with Smoronk and Sullivan several times a week after he met them and was on hand when "supplies" would come in, often in the mail. He said he saw as much as two kilos of cocaine as well as large shipments of meth and artificial (anabolic) steroids. Wall also said he saw on more than one occasion as much as $75,000 in cash on hand at the house in connection with the couple's drug enterprise.

"What were you doing when drugs came in?" Lugo asked.

"Just visiting," said Wall, who said he was aware of drugs being kept all over the Meaderboro Road property, including in the garage, the floor safe, a tool room off the rear back door, in a closet where Smoronk kept camera supplies, even in coffee cans.

According to testimony from Wall, Sullivan got more into the drug business after Smoronk began spending more time in Southwest Florida than Farmington. Wall further testified that in the months leading up the women's deaths, the drug activity around the Farmington house was getting busier and "more intense" and that Smoronk told him he had a new connection.

Wall also said while Smoronk and Sullivan appeared to get along fine for years the relationship soured to the point that Smoronk was getting "pretty physical and violent" with her.

"Did you ever witness something that concerned you?" Lugo asked.

"Yes, I was working on his (Smoronk's) van and they were arguing and Dean grabbed her by the throat and I had to pull him off," Wall told the court.

He said Smoronk around that time told him "he wanted her out, didn't want to give her money, but wished she was out of his life."

But Wall also testified that multiple times she tried to get out, but he wouldn't let her.

Wall also told Lugo that on Jan. 31, 2017, just two days after the killings, he saw Smoronk at the house of a mutual friend.

"What was his demeanor?" asked Lugo.

"He seemed calm and laid back," replied Wall, who also said Smoronk wasn't worried about "South Carolina" anymore. "He said he didn't have to be worried cause Chris was no longer around."

Smoronk and Sullivan were both arrested in South Carolina in 2014 on meth trafficking charges after a traffic stop on Interstate 95. Police say they were pulled over by a Sumter County deputy after their car pulled into the lane of a police car and almost sideswiped the cruiser.

Smoronk and Sullivan both faced up to 10 years in prison.

During one of Verrill's bail hearings in 2017, his then defense attorney Melissa Davis suggested that Smoronk may have been leery that Sullivan would testify against him on those charges.

Earlier in trial testimony, it was said that Sullivan was hoping Smoronk would accept a plea deal and "she would walk" on the South Carolina charges.

The trial will continue on Friday with more defense witnesses traveling from Florida to take the stand.