Developing a strategy to 'change the face of the state' 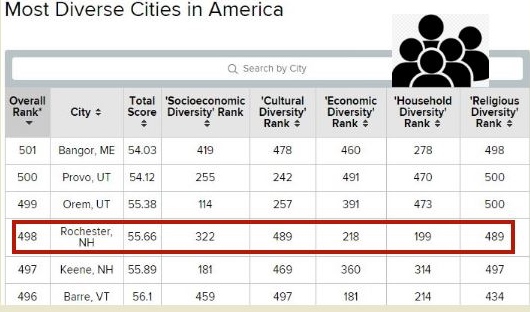 The WalletHub study shows Rochester among the least diverse of a sampling of some 500 cities nationwide. (Courtesy WalletHub)

In a study that looked at the Most Diverse cities in American, Rochester was found to be near the bottom of the heap, a recent study shows.

The study, produced by WalletHub, gave Rochester a total score of 55.66, which placed it at 498, three from the bottom in a sampling of 501 cities nationwide.

The study looked at several key metrics that zeroed in on diversity, including socio-economic, cultural, household and religious.

The Lilac City's cultural diversity rank was only slightly higher, coming in at 489.

Rogers Johnson, who heads the Governor's Advisory Council on Diversity and Inclusion and is president of the Seacoast NAACP, told The Rochester Voice in an exclusive interview earlier this week he wasn't surprised, but that there is a developing strategy to "change the face of the state."

The council, which was established by executive order by Gov. Chris Sununu in December, seeks to "combat discrimination and advance the ends of diversity and inclusion."

Johnson says the need to diversify is paramount for economic reasons.

He looks at corporations like Delta Dental and New Hampshire Ball Bearing that are committed to helping to diversify their workforces to reflect the changing demographics within the United States.

"The question is how to get corporations into the state," Johnson said. "It's in our best interest to have more diversity. There's no reason anybody, a corporation, would want to move here and it's 90 percent white. We're looking at this from an economic approach."

Another of the council's mandates is to "identify and recommend ways in which the state can support local and community efforts, through educational programs or otherwise, to combat discrimination and advance diversity and inclusion."

To that end Johnson and the council are working on developing strategies that would induce local corporations, schools and police forces to provide internships to minority college graduates that would allow them to experience working and living in the Granite State.

Johnson said the program would target minority job applicants and help them with expenses during the internships.

"Say you have some kid from Charlotte, North Carolina, and he's looking for a job in education or law enforcement. You think he's going to think about coming to New Hampshire? No., so you help him with housing during an internship or student teaching. Police departments across New Hampshire are actively seeking police officers of color. Same with schools."

The hope would be, Johnson said, that some of those who traveled from more diverse sections of the country like in the South, would come to see the beauty of New Hampshire and Northern New England, and put down roots.

Johnson said the program does not equate to affirmative actions, it's just being smart from an economic standpoint.
"It's being smart to have a diverse population into which larger corporations want to invest," he said, adding that many of those corporations want a diverse workforce as part of their guiding principles and mission statements.

Rochester Deputy Police Chief Gary Boudreau said on Friday that the Rochester Police Department is always seeking to make the department more reflect the community they serve and that they actively seek minority and female applicants.

The force currently has no African-American officers, he said.

Johnson said the program currently being formulated calls for absolutely no government money, but would be done with money from private groups.

The study's cultural diversity ranking was based on three key metrics: racial and ethnic diversity, language diversity and birthplace diversity.

Census data appears to back up the study's findings. In the 2010 census Rochester was 95.4 percent white, 0.8 percent African American, 1.2 percent Asian and 1.8 percent Hispanic or Latino.

If anyone is interested in participating in the Council's work or have any questions, contact Rogers Johnson, Council Chair, at rogersjjohnson@yahoo.com.

The full WalletHub report can be viewed here.