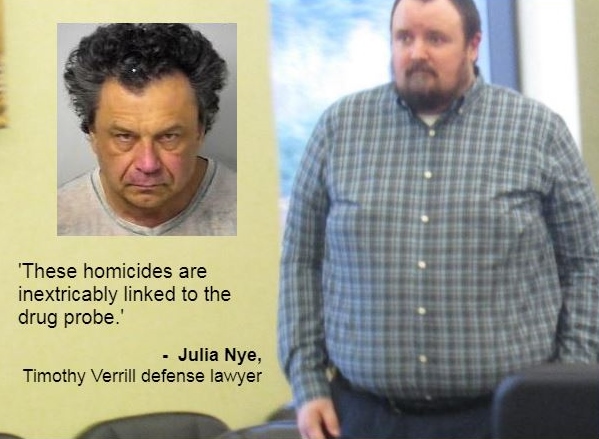 DOVER - The more than 10,000 pages of discovery evidence in a Farmington double-murder trial could grow exponentially after the suspect's defense team on Thursday demanded prosecutors turn over all material related to a two-year drug probe by state and federal agents into the convicted drug dealer who was a longtime boyfriend of one of the victims.

Defense attorney Julia Nye told the court she had sought discovery items connected to the drug probe during the lead-up to last month's trial that ended in a mistrial, but asked prosecutors to widen their scope and seek all discovery items not only from State Police narcotics agents, but also the DEA, which was involved in the multi-state probe.

Dean Smoronk, who is awaiting sentencing next month in U.S. District Court in Concord for trafficking meth, is alleged to have been the ringleader of a drug enterprise that stretched from Farmington to Southwest Florida to California.

"The homicides are inextricably linked to the drug probe," said Nye.

Timothy Verrill, 37, of Dover, a close friend and alleged drug trafficking subordinate to Smoronk, is charged with first-degree murder in the deaths of Christine Sullivan, 48, of 979 Meaderboro Road, Farmington, and Jenna Pellegrini, 32, of Barrington.

Sullivan was the longtime girlfriend of Smoronk, but witnesses at last month's trial said their relationship had soured to the point she was planning to move out within a week of the day she died.

Smoronk, meanwhile, spent most of his time in Cape Coral, Fla., where he had another longtime girlfriend, witnesses including the girlfriend said.

Last month's mistrial was declared by Strafford County Superior Court Judge Steven M. Houran after the defense brought forward numerous instances in which they had learned of potential evidence that had not been supplied by prosecutors and state police.

Discovery is the process by which prosecutors are required to share with the defense all the evidence they have so that attorneys for the suspect can present the strongest case for their client.

In this case, most of the culpability for prosecutors' not supplying all discovery items fell upon the State Police Major Crimes Unit. The lead investigator has since been removed from the position, prosecutors said.

Meanwhile, Geoff Ward, the lead prosecutor in the case, said he would be fully cooperating as he has all along to ensure all discovery items are brought forward, including new revelations that there were recorded jailhouse phone calls involving Smoronk.

Both sides agreed there may be sensitive information that the government may not want to turn over due to ongoing drug probes, but Nye said each matter will have to be discussed in court.

"If there is info, and they (the government) doesn't want to share it, that has to be litigated," she said.

While Ward said he expects to comply fully with all evidentiary sources comprising New Hampshire State Police and the DEA, he said he had no plans to reach out to officials in South Carolina, where Smoronk still faces meth trafficking charges from a 2014 traffic stop; or Virginia, where he was convicted of drug possession in June 2017 after a traffic stop there.

He said defense lawyers have the option to ask for those records if they want to.

A status conference to discuss progress on discovery issues is tentatively set for Dec.18 at 11:30 a.m.