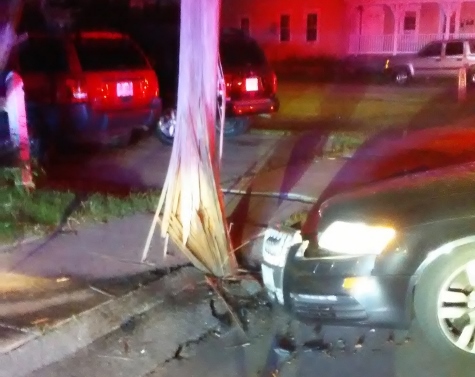 ROCHESTER - Police think distracted driving was likely the cause of an early morning crash that damaged a utility pole today on Winter Street.

Police responded around 1 a.m. to the area of 12 Winter St. where it was found that a single vehicle had struck a pole causing it to snap.

Initial investigation revealed that a 2008 Audi S6 being driven by Nigel Reed, 40 of Dover, struck the pole when Reed veered off the road.

Reed and his passenger, Maria Umbarita Fuentes, 24, of Dover, were evaluated by EMS at the scene. Both refused transport to be checked out at the hospital.

The vehicle suffered heavy front end damage and had to be towed from the scene. Eversource Energy responded to the scene and determined that the pole needed to be replaced. Preliminary investigations have determined that distracted driving may have been a factor in the crash. If anyone has any information regarding this accident they are asked to contact Officer Garneau of the Rochester Police Department.

As of now Winter Street remains closed except for local traffic while crews replace the pole.