'Do not contact or write to my office, just let this issue rest!!!!!'' 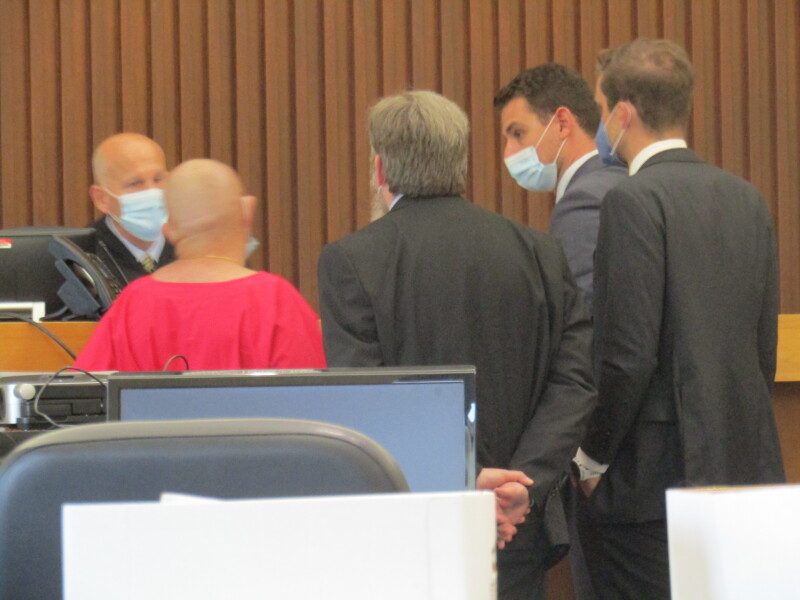 DOVER - The trial of a former Milton Public Works chief accused of trying to bilk millions of dollars from a Rochester woman's estate entered its fourth day on Friday with a Dover attorney testifying that a letter purportedly sent by his firm threatening one of the woman's friends was a fake.
Michael R. Smith, 59, a former Milton resident who now lives in Avon Park, Fla., is facing up to 15 years apiece on five theft counts if convicted of stealing or trying to steal some two million dollars from Mary G. Kibbe, a former Milton selectperson who died in November 2017, just months after Smith moved into her palatial 5,000 square foot home at 10 Stanley Pond Drive in Rochester.
The trial began on Monday and is expected to wrap up with closing arguments on Tuesday. Whether Smith will testify on his own behalf is unclear.

Gregory D. Wirth, a longtime Dover attorney, testified in Strafford Superior Court that he represented Kibbe in 2013 in a property damage case and last spoke with her in 2017, a few months before she died.
He said he was taken by surprise when Milton Police sent him a letter that appeared to have been sent by his office threatening a Milton Mills man with court action if he didn't end his efforts to speak with Kibbe in the fall of 2017.
Prosecutors allege that Smith was in the throes of taking control of Kibbe's assets, including getting himself installed as the sole heir of her $2 million dollar estate, and wanted no one to get in his way.
Wirth told the court the letter purported to be from his office was obviously doctored to look authentic but didn't have the same letterhead, was full of grammatical errors and was just not something he would write to anyone.
The letter, which was displayed on several large screens throughout the courtroom, told the Milton Mills man in part, "Ms Kibbe has told you repeately that her estate will be going to the Naval Academy point. The next time you write, call or try to (can't be seen), my firm will file a Motion in Superior Court for No Contact Order and Elderly Extortion and your work place will be notified of your actions.
"Mary, will be 98 years old on the (Oct.) 31st and she just wants to be left alone."
The letter ends with: "Do not contact or write to my office, just let this issue rest!!!!!"
Wirth added that some months later Smith visited his office unannounced and apologized for writing the letter purported to be from the law firm.
Smith, who is representing himself at trial, was barefoot and wearing a pink smock reminiscent of Hare Krishna garb again on Friday.
Kibbe, a former Milton selectperson and Milton Free Public Library trustee, allowed Smith to move into her home in September 2017.
According to opening arguments by Senior Assistant Attorney General Brandon Garod, Kibbe, in the months before her death, had shared with several people that she wanted to leave her entire $2 million estate to the United States Naval Academy, from where one of her two late husbands had graduated from. She had no other heirs.
Garod also said that Smith had managed to get a hold of and spend about $500,000 of her assets. The rest ended up with the Naval Academy.
A source familiar with both Kibbe and Smith, who lived in Milton Mills, told The Rochester Voice shortly after Smith's indictment in 2018 that the two were very close despite their vast age difference.
Smith's Facebook page at the time of the indictments showed he was also a former Milton Water commissioner and Sewer commissioner, a member of the Zoning Board and Planning Board and on the Strafford Regional Planning Commission.
It appears that Kibbe served at least two terms as selectman before losing in a disputed 1997 election in which a write-in candidate running against her distributed stickers outside the polls to be placed on town ballots.
Kibbe later moved to Rochester. She died on Nov. 11, 2017.
Smith's theft case history is a full 16-pages, with numerous motions made by Smith to dismiss the case on evidence issues such as "fruit from a poisoned tree," professional conduct and corruption and conspiracy in concert
A jury trial was scheduled for July 2019, but never materialized.