Do they know something we don't know? 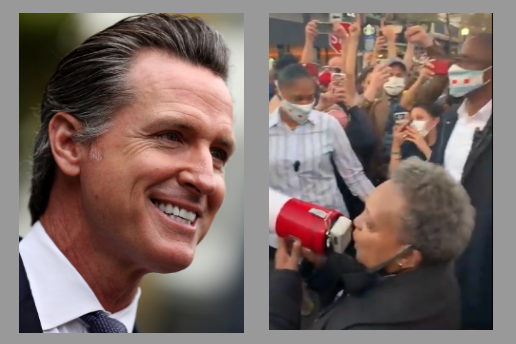 DO AS I SAY, NOT AS I DO: Both Calif. Gov Gavin Newsom and Chicago Mayor Lori Lightfoot recently disobeyed their own COVID orders. (Courtesy images)

Exactly six months ago today on May 15 DHHS reported 88 new COVID-19 cases, five new hospitalizations and eight new deaths.
On Saturday DHHS reported 384 new coronavirus cases, no new hospitalizations and one new death.
Hmmm. Could it be we are reaching herd immunity?
Months ago I asked Dr. Benjamin Chan, New Hampshire's top infectious disease expert, if herd immunity could be a good thing.
He said herd immunity would be bad because, "people would get sick and people would die."
Well, what if we were achieving herd immunity right now, whether we like it or not. Is there evidence to disprove this?
On Thursday Chan announced that they would stop contact tracing every COVID case.
"Given high rates, we want to announce...to introduce the change that public health will no longer be conducting contact tracing investigations for each and every person diagnosed with COVID-19," he said, prioritizing those who are most at risk.

Now I'm no doctor and I'm no infectious disease expert, but I do report the numbers as they're reported by the government.
And the numbers suggest to me that this second surge is not doing the damage the first did, at least thus far.
You might recall that on Oct. 25 The Rochester Voice produced a story based on DHHS data that showed there were 852 newly identified cases between Oct. 11 and Oct. 21. Of those 852 cases only nine required hospitalization, DHHS spokesman Jake Leon said on Oct. 23. That's a hospitalization rate among those cases of 1.05 percent. Meanwhile, DHHS data shows the hospitalization rate among all COVID cases at 6 percent, but it keeps going down as more are tested. Back in March when the pandemic was starting and testing was discouraged unless you were suffering severe symptoms, the hospitalization rate was 19 percent.
So on Tuesday we emailed DHHS for a similar data point regarding the cases identified from Nov 4-9. We got no reply.
On Wednesday we make the same request and added that we had a deadline that afternoon, because during an off-the-record New Hampshire Press Association meeting with government public information officials last month they said putting a deadline on the email would help them serve newsrooms more efficiently.

Well, someone didn't get the memo.
Now consider this. Early on in the pandemic DHHS releases noted whether a person whose death was attributed to COVID also had an underlying condition.
When I asked DHHS why they stopped doing that they said words to the effect that, "We don't release information that is not in the interest of public health."
Well, maybe someone got talked to, because if you have a hospitalization rate of about 1 percent instead of the 6 percent listed on today's DHHS data sheet, folks might get a little lax about mask wearing and social distancing.
Maybe even the governor of California would disobey his own lockdown orders by going to a birthday party at a posh restaurant in wine country or the mayor of Chicago would have a not so socially distance victory celebration in the streets after the election without even having a mask on. Lions and tigers and bears on my!
But the real elephant in the room is the lack of transparency. And trust me, when you hear crickets ... it ain't for nothing. See we can do double negatives just like DHHS.
I mean we're paying thousands of contact tracers millions of dollars to keep people safe and now New Hampshire DHHS officials say there's too many infected people to do contract tracing on all of them.
Doesn't exactly make me feel like dancing in the streets, not that that's allowed.