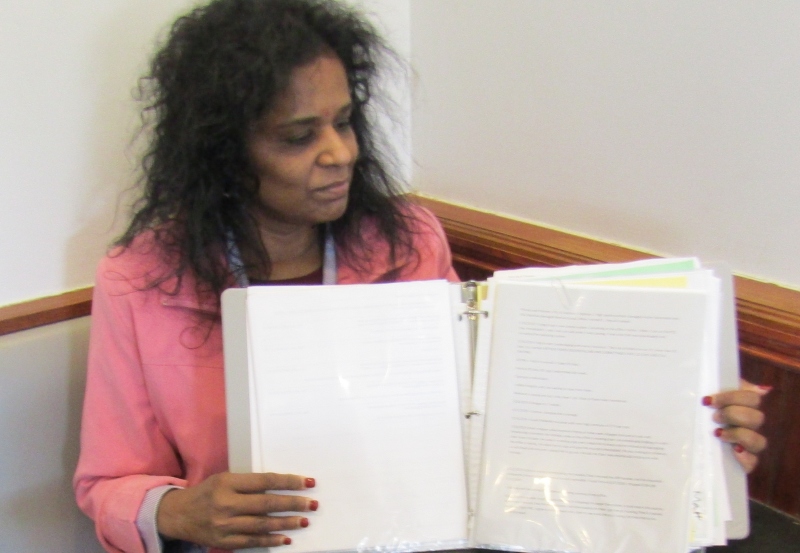 Dr. Mala Sundaram shows some of the documentation from her years-long battle to regain her medical license she says was wrongly taken from her. (Rochester Voice photo)

ROCHESTER - In the last years of his life, longtime Rochester physician Terry Bennett desperately searched for a doctor who would take over his independent practice across from the Commons.

Now the doctor he hand-picked to succeed him is fighting for her professional life after seeing her license suspended in two states, including New Hampshire.

Dr. Mala Sundaram, an India-born émigré who earned her medical degree in New York more than 15 years ago and granted her license to practice medicine in New Hampshire in 2005, was Bennett's pick to take over both his primary care practice and Suboxone clinic, which has about 175 patients who need daily doses of the drug to stay off opioids.

Volunteers and staff who used to work for Bennett say the local Suboxone using community is suffering without the local dispensary.

"I know at least four Suboxone patients Dr. Bennett used to treat who have died since he died," said Mindy Haney, a former volunteer at Bennett's Quick Care Clinic across the street from the Rochester Common.

Sundaram said the last time she spoke to Bennett was on Sept. 29, the day before he died.

"He said, 'Please take care of my patients' and I held his hand and said I would,'" she said recently.

However, Sundaram, described by many as a quiet, caring, compassionate physician, has had problems with the Maine Board of Medicine for several years now. She blames them on her language barrier (though she speaks fluent English), being a woman of color and being an independent unaffiliated physician.

The complaints are largely over her treatment of Lyme disease at her former Sanford, Maine, practice, where she often prescribed large IV doses of vitamins and antibiotics for patients with chronic forms of the disease, now called post-treatment Lyme diseases syndrome. She still believes they are a viable option, but has stopped taking Lyme disease patients as part of a compliance agreement sought with the Maine Board of Medicine.

Other patient complaints included her refusal to prescribe long-term narcotics, except for cancer and hospice patients, and one patient's outrage after Sundaram charged them $25 for a no-show appointment.

Sundaram told The Rochester Voice she refuses to prescribe long-term opiates and says the medical board's demand that she not only allow it but also pay $750 every two weeks for prescription monitoring is nothing but a money grab she can't afford as an independent physician.

"They (state medical boards) like to harass independent physicians," said Sundaram, who has had to put up with random drug testing, psychological testing and even re-education classes as she sought to complete the 2017 compliance agreement with the Maine Board of Medicine. She was found noncompliant in July after which her license was suspended in both New Hampshire and Maine.

The $10,000 re-education program that was administered in 2017 by the Raleigh, N.C.-based Center for Personalized Education for Physicians found Sundaram of low intellect with poor cognitive reasoning, poor communication skills. Her testing put her in single-digit percentiles in multiple cognitive category functions.

However, Sundaram fumes at such assertions, claiming that those conducting the tests were racist and unprofessional. The manager of the testing did not return a phone message to The Rochester Voice.

Meanwhile, an independent audit of her work performed by a Maine physician after the CPEP program confirmed Sundaram's assertions about the testing agency and her treatment by the Maine licensing board.

Dr. Kathleen McCall, a provider for Maine Health, who was assigned to audit Sundaram's practice, said she was shocked when she visited and watched Sundaram perform brilliantly at her Sanford practice.

"After reading the CPEP plan initially, I was prepared to be (evaluating) a marginal physician who would need a lot of help in terms of clinical skills and decision making to get back on track," she said in her report. "That isn't what I found at all. If anything, I think Dr. Sundaram's difficulties were probably incomplete documentation, a problem, honestly, that all of us in primary care face."

"As for her clinical knowledge, to be frank, I found all of the 'educational points' that CPEP stipulated to be excessive to the point of being ridiculous," she added.

McCall also pushed back on the notion that longterm antibiotics for Lyme disease symptoms is some type of quackery.

"We discussed the use of IV ceftriaxone (an anti-bacterial) for Lyme disease, which is the standard of care currently. Although I don't prescribe that, I think it's a perfectly reasonable thing to do. In addition, there are multiple 'Lyme disease specialists' in the state who often have patients on multi-drug regimens for a year or longer without anyone questioning their judgment. My guess is that because they are articulate, Caucasian males, their care is much less likely to be called into question."

Another doctor who audited Sundaram practice, Dr. Elisabeth Fowlie Mock, a family physician affiliated with Eastern Maine Medical Center, "found her charts to be well documented, complete and in order and exceeded documentation in compliance and in excess of standards in all charts."

She also found Sundaram's Sanford office "warm and inviting" and watched as she discussed sometimes eight or nine separate patient concerns in a single visit, discussing with the patient every health problem and how to manage it by treatment or prescription.

"Her medical knowledge is adequate and competent, her professionalism of 'highest quality," Mock concluded.

This fall Sundaram petitioned the New Hampshire Medical Board to allow her temporary, emergency license so she could treat Suboxone patients formerly served by Dr. Bennett. She was refused.

Neither the Maine nor New Hampshire boards of medicine would comment for this story.

Sundaram suspects the New Hampshire board's decision is based on Maine's decision not to sign off on her compliance agreement from 2017, which was rejected by Maine in July. While the states have no official reciprocity agreement, Sundaram believes Maine's action ended any chance of gaining back her license in the Granite State.

The Rochester Voice has learned that Sundaram has fulfilled all of the items listed in the Maine compliance agreement except for her refusal to prescribe long-term narcotics, which carries the $750 biweekly monitoring fee.

She did agree to prescribe short-term drugs and pay a separate $750 biweekly monitoring fee for that, she said.

Meanwhile, Suboxone patients in Rochester have had to scramble to find a new provider since the death of Bennett, who had about 175 patients in his Suboxone practice.

There is only one other listed Suboxone clinic in Rochester, Groups in the Winter Street professional building.

At Groups', one of several offices statewide, three doctors prescribe Suboxone for about 70 patients who must attend a single hourlong therapy session each week to get their supply.

Lori Boisvert, the office coordinator, said there is no waiting list, but patients do have to pay the $60 therapy session fee weekly in addition to their Suboxone cost.

Boisvert said insurance sometimes covers some of the cost, but not always.

Meanwhile, Bennett's practice doesn't require a weekly $60 therapy session and has a sliding scale, meaning those who are financially strapped are charged less. Sundaram confirmed today she would never levy such a charge.

In a March 2018 story on how Suboxone helps many local addicts stay clean, Bennett said traveling to Somersworth is out of the question for many of those affected by drug dependence, which is why his downtown practice was vital.

Bennett's wife, Piper, said earlier this week she hopes Bennett's practice can be revived with the help of Sundaram.

"I hope this is resolved," she said. "This is a helpful service and patients need access."