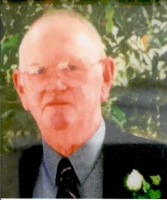 ROCHESTER - Donald Tompson, 87, of Portland St. died Thursday, March 1, 2018 at his home after a sudden illness.
Born May 13, 1930 in Rochester, he was the son of the late Eban and Vera (Holmes) Tompson.
Donald has lived in Rochester all his life. He attended Spaulding High School before joining the Navy. After being honorably discharged from the Navy he began working as an electrician at the Portsmouth Naval Ship Yard. He was a member of the American Legion Post and past president of the Rochester Country Club. He enjoyed playing golf, hunting and fishing or just spending some down time with his loving family.
Members of his family include his wife of 67 years, Mary (East) Tompson; son, Steven Tompson and his wife Kimberly of Milton, N.H., John Tompson and his wife Julie of Milton, his daughters, Linda Hescock of Milton and Mary Clark and her husband Dean; nine grandchildren, 16 great grandchildren and three great great grandchildren; a sister, Eleanor Towle of Rochester.
He was predeceased by his son, Curt Tompson.