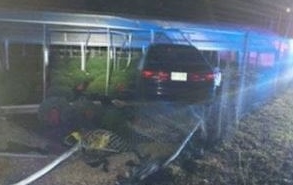 ROCHESTER - A Dover man was arrested late Sunday night after his car crashed into Stuart's Greenhouse at the corner of Milton and Cross roads.

Police say an investigation showed that Joseph Stanley, 23, was driving a 2005 Honda Accord traveling south on Cross Road when it left the roadway striking one of the greenhouse buildings of the business.

Neither Stanley nor his passenger, Brianna Sullivan, 20, of Portsmouth, were taken to the hospital, but did speak with EMS at the scene.

Stanley was arrested for driving after suspension. His vehicle was towed.

The case remains under investigation at this time. Anyone with information about the crash is asked to contact the Rochester Police