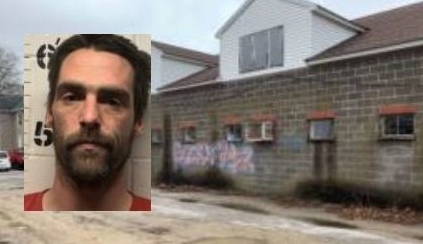 Pictured is some of the damage Christian Dawley, inset, is accused of causing in downtown Rochester in April. (Rochester Police photos)

ROCHESTER - A Dover man was arrested on Tuesday in a downtown Rochester graffiti spree that occurred in April.

He is accused of vandalizing numerous areas in downtown Rochester on April 30 by spray painting graffiti type writing on some dozen businesses, buildings and other property in the area of South Main, North Main and Hanson streets. The monetary damage to the buildings is more than $2,000.

Dawley, who is currently being held at Rockingham County jail on unrelated charges, was scheduled to be arraigned today via video at Strafford County Superior Court.