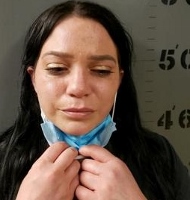 PORTSMOUTH - Police say a Dover woman was charged with drunken driving and reckless conduct on Sunday after she bolted across a median at the Portsmouth traffic circle and continued driving the wrong way on Route 16.

Adrienne Lessard, 33, was spotted about 11:55 p.m. by Officer Stephen O'Connor of the New Hampshire State Police Marine Patrol as he was headed southbound on Route 16 in Portsmouth. O'Connor reported seeing a 2017 Subaru Legacy facing the wrong way, stopped in the breakdown lane.

Officers determined Lessard entered the Portsmouth traffic circle from the Route 1 Bypass south before driving over the curbing and through a grass median that separates the ramps to Route 16. She then allegedly headed northbound on Route 16 in the southbound lanes for about a half-mile before pulling over in the breakdown lane.

Lessard refused post-arrest alcohol testing and was transported to the Rockingham County jail, where she was released on bail, police said. She is scheduled to be arraigned on July 9 at Rockingham Superior Court.

Anyone with information regarding this incident is asked by police to contact State Trooper Matthew Bailey at 223-4381 or Matthew.Bailey@dos.nh.gov.