Downpour aside, Wings and Wheels an unabashed, sun-splashed spectacular 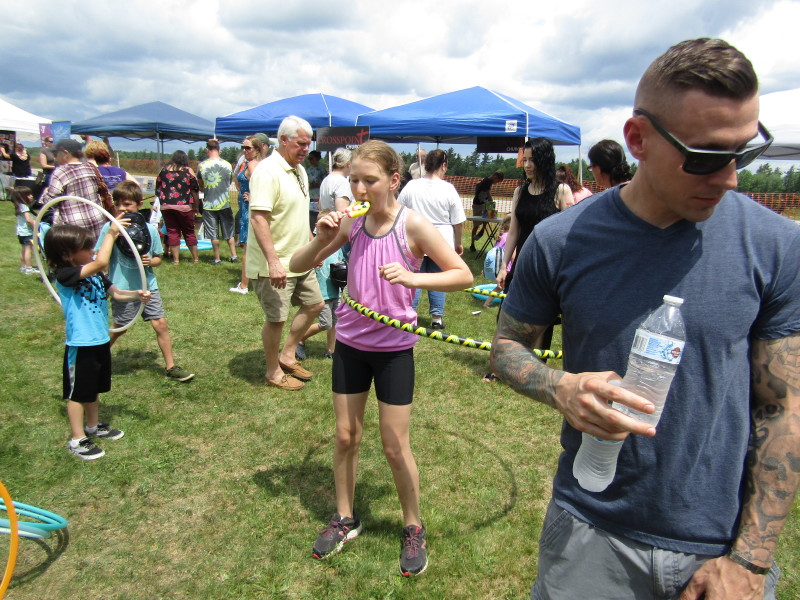 Hooping it up: Violet Webb, 12, of Loudon works on a lollipop while keeping her hula hoop off the ground at Saturday's Wings and Wheels at Skyhaven Airport in Rochester. To her left, is her brother, Silas, 10. (Rochester Voice photos)

ROCHESTER - After a year's hiatus, Rochester's annual Wings and Wheels extravaganza returned on Saturday bigger, better and tastier, too.

"It's been crazy," said lead organizer Jenn Marsh of the Rochester Rotary, which hosted the event along with Rochester Police and Pease Development Authority. Marsh said 900 poured through the turnstiles in the first half hour, alone.

One of the most delicious improvements to this year's Wings and Wheels was a record 10 food trucks spread across the airport's fields that offered everything from high-end Italian cuisine to traditional burgers, fries, sausage subs, lemonade and ice cream.

A staple of the event has always been allowing children 8-17 to get to fly in a plane for free courtesy of the EAA Young Eagles program.

"I liked looking down," said her brother, Silas, 10, who said it was his second time flying at the Wings and Wheels.

Meanwhile, for grownups there were eight-minute helicopter rides for $30 apiece from Seacoast Helicopter, which brought two choppers to the event.

"We have been booked solid all day," said Seacoast Helicopter co-owner Karen Cultrera as she took reservations.

Lifeflight of Maine out of Sanford also had its helicopter on the airport grounds for kids to climb aboard and see up close and personal.

Meanwhile, for those who like to keep their feet on the ground, there were 72 classic cars on hand, including a pristine De Tomaso Pantera, an Italian import that was sold by Lincoln Mercury dealers here in the United States from 1971-74.

The car's body was built in Italy where a Ford motor would be installed before being brought back to the U.S. where it sold for about $10,000, its owner, a Dover man, said.

The car equipped with a 351 Cleveland and four-barrel Demon 650 carburetor, puts out about 425 horsepower, the owner estimated.

There were also demonstrations and contests for hula hoop, yoga and skateboarding.

Saturday's event was free to the public but donations were urged and will go to several local charities, Marsh said.

Helping to make it a success were the more than 100 volunteers who helped with everything from manning the gate to parking and selling event merchandise.

In addition Albany Engineering and Phase II let the public use their parking lots for overflow parking while School Transport of New Hampshire donated two buses to shuttle folks back and forth.

The Rochester Voice was a media partner.