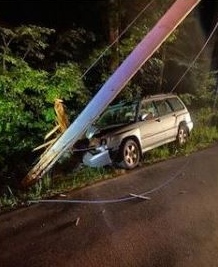 The Subaru sustained heavy front end damage and was towed from the scene. (Rochester Police photo)

ROCHESTER - A Barrington man escaped serious injury after police say he dozed off while driving and crashed his car into a utility pole on Black Water Road early today.

The accident occurred around 1:25 a.m. in the area of 332 Black Water Road when police say a southbound 2002 Subaru Forester driven by a fatigued Scott Martin, 51, veered off the roadway and struck the pole. Martin's vehicle sustained heavy front end damage and was towed from the scene. Martin, who was not wearing a seat belt, was checked by EMS on scene and found to have no injuries.

The Rochester Police are asking anyone who may have information that could assist with this investigation, to call Officer Marshall at (603) 330-7128. You can also provide information and remain anonymous by calling the Rochester Crime Line at 335-6500 or Text to: CRIMES (274637) Body of Text: TEXT4CASH + your tip. Cash reward are offered for information that leads to an arrest.