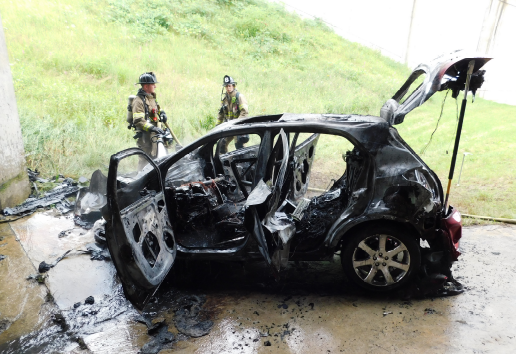 The Buick Encore was demolished in the crash and fire. (NHSP photo)

NASHUA - A Nashua was seriously injured in a fiery crash on an F.E. Everett offramp on Monday.
The single-vehicle crash occurred around 2:50 p.m. on the Exit 2 southbound off ramp when an investigation revealed that a 2013 Buick Encore driven by Kevin Hanley, 59, failed to negotiate the curve on the off ramp and drove head on directly into a bridge abutment.
A passing motorist stopped to pull Hanley from the vehicle just before it became fully engulfed with fire, police say.
Hanley was transported to Southern New Hampshire Medical Center before being transported by Boston MedFlight to Boston Medical Center for treatment of serious life-threatening injuries.
The exit 2 off ramp to the D.W. Highway was shut down for around an hour and a half while crews worked to extinguish the vehicle fire, process the scene and tow the vehicle.
Speed appears to be a factor in this crash, however, all aspects remain under investigation and anyone who may have witnessed the crash is asked to contact Trooper J. Winslow at Jacob.Winslow@dos.nh.gov or 603-223-8836.