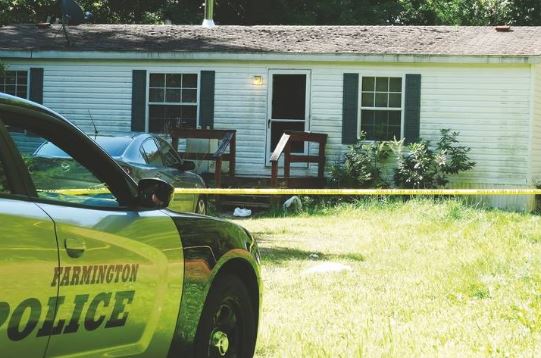 Police continued their investigation into Monday's shooting at the home where the suspect was staying. (Kimberly Haas/Union Leader)

FARMINGTON - A Farmington man is being held on no bail today at Strafford County Jail after police charged him with attempted murder on Monday.

Meanwhile, police say they found guns and drug-related items while searching the home that was the scene of the shooting early Monday morning.

Nathan Foster, 20, of 154 Ridge Road, turned himself in around 9:30 a.m. on Monday. He was arraigned Monday and continues on a no bail order.

The shooting occurred around 12:15 a.m. outside the house where he was living.

The victim was found with a gunshot wound to the upper chest/shoulder area and taken to Frisbie Memorial Hospital for treatment where he is reported in stable condition.

Police said a 9 mm rifle, a.40 caliber handgun and two bongs were taken from the home Monday after a search warrant was granted.
Police don't think either of the guns found at the house were used in the shooting, and are still looking for the gun used, which was earlier described as a small caliber handgun. Police also want to find a red 2005 Dodge 1500 pickup they believe Foster stole immediately following the shooting.
Anyone with further information is encouraged to call Farmington police at 755-2731, or their crimeline at 755-9797.