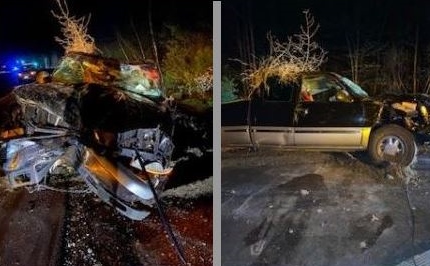 EAST ROCHESTER - An East Rochester man seriously injured early today when his pickup flipped over during a crash on Highland Street is reported in good condition this afternoon, according to a Portsmouth Regional Hospital spokesperson.

The crash occurred around 12:40 a.m. near the intersection of Highland Street and Eastern Avenue.

When police and rescue personnel arrived they found the 2002 GMC K 1500 in the woods on its roof with the driver, Christopher States, 22, trapped under the vehicle. After emergency crews were able to extricate States from the vehicle, he was taken to Frisbie Memorial Hospital and later to Portsmouth Regional Hospital with what were described as life-threatening injuries.

After an initial probe it was determined that the vehicle was traveling southeast on Highland Street when it initially left the roadway about 800 feet from where it was located. Police then believe States attempted to regain control of vehicle but was not able to do so before striking a tree, flipping the car onto its roof.

The vehicle sustained front end heavy damage and was removed from the scene.

The investigation is ongoing. If anyone witnessed this collision or has any information they are asked to contact Officer Carl Root at the Rochester Police Department at 603-330-7128.