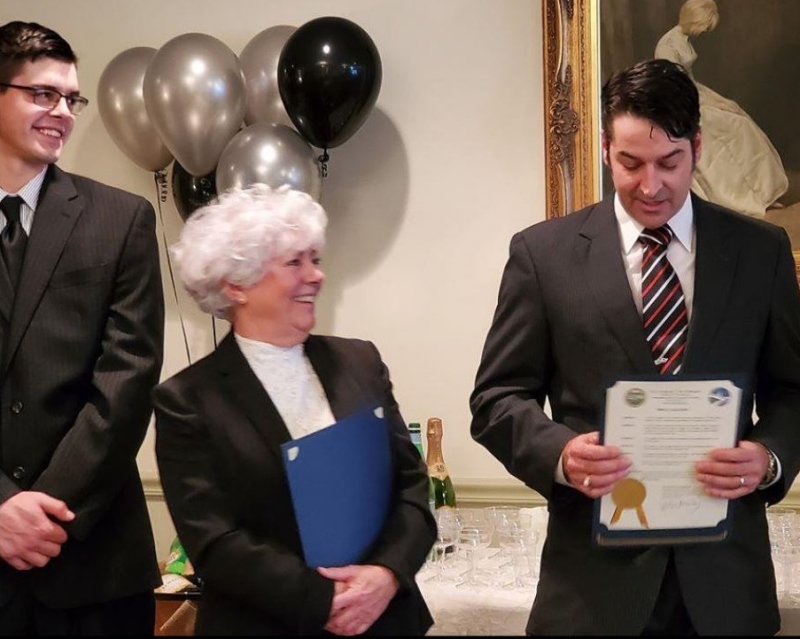 Edgerly Funeral Home owner Susan Edgerly smiles at her son, Morgan Edgerly, VP, as he holds a proclamation during a ribbon cutting ceremony for the 180-year-old business. At left is Jason Wagg, also of Edgerly's. (Tonya Lee Hervey Photography)

ROCHESTER - The year of 1839 saw the first recorded use of "OK" [oll korrect] in the Boston Morning Post newspaper and the prohibition of dueling in Washington, D.C., where Martin Van Buren occupied the White House as the nation's eighth president.

The year of 1839 also saw the creation of Rochester's oldest continuously run business when the R.M. Edgerly & Son Funeral Home set up shop in the family residence on the property it still occupies on South Main Street.

"It started as just a home with a small funeral home business," said Susan Edgerly, owner and president. "Then we built a separate business facility in 1960, and added the front addition in 2005."

Through its 180 years of service, the funeral home has maintained its same values of compassion and caring, she said.

And while so many industries have gone the way of franchised, corporate giants, she believes family owned funeral homes are somewhat immune to such business vagaries.

"Most people like the idea of a family owned funeral home and the personal service that comes with it," Ms. Edgerly added.

Proclamations from New Hampshire Gov. Chris Sununu, Rochester Mayor Caroline McCarley and the Town of Barrington were read as well as from the New Hampshire Funeral Directors Association, the latter two read by Joel Sherburne of Barrington.

Anne Brown of Daystar, who is Chairman of the Board of the Greater Rochester Chamber of Commerce, also spoke on the business' longstanding tradition, which comprises five generations of Edgerlys. The funeral home is notably the oldest continuously run and family owned funeral home in New Hampshire.