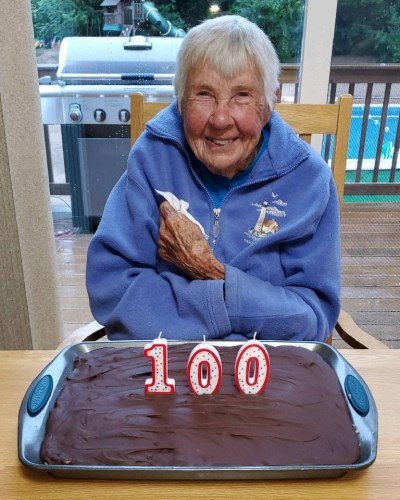 EAST ROCHESTER - Edith Pierce, 100, died holding her granddaughters' hand, on Saturday, Aug. 15, 2020 at her home, surrounded by her loving family, after an accidental fall at her home.
Edith was born Sept. 2, 1919 in Haverhill, Mass. the daughter to Olive and Milton Corliss.
Edith was predeceased by her parents, husband Clyde in 2004 after 55 years of marriage, brother Bob, sister, Virginia and granddaughter Stacy Kean.
Members of her family include her daughters, Eileen Thompson, Brenda Kean and husband George; four grandchildren, Bill Copp, Tracy Savoie, Eddie Kean and Becky Kean; six grandchildren, Haley, Brandon, Jillian Kean, Austin Kean, Alexis Copp and Shelby Savoie.
Edith graduated from Gorham College and became a schoolteacher. After a year she joined the Navy and was stationed in San Diego, Calif. After that she returned to teaching and retired in 1983.
Edith enjoyed camping, traveling, climbing mountains, swimming, sewing and reading. Summers were spent in Ocean Park, Maine, where she owns a cottage and loves the beach.
Edith loved to travel and went many places but the highlight of her life was going to Egypt. She truly enjoyed Fourth of July parades and watching M*A*S*H on TV.
She wrote, "I hope they have dogs and cats in heaven" because she loved her animals and walking her dogs. She raced in a 5K every year for 18 years.
Edith 's family wants to thank Cornerstone Hospice and VNA and their staff for the wonderful care they extended Edith.