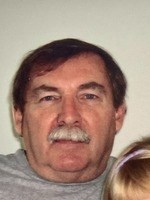 May 18, 2021 at Wentworth Douglass Hospital surrounded by his loved ones. Eddie was born on October 10, 1947 in Portsmouth, a son of Willis James and Ruth (Hayes) Marble.
After he graduated from Marshwood High School in 1967, Eddie joined the Army where he served bravely beyond reproach on low observation helicopters in Vietnam.
He then worked as a talented carpenter, even building his own home, before commencing employment with PNSY as an inspector. He owned rental property for several years that he maintained and managed himself.
Eddie was always using his skills as handy man for his extended family and friends. He was always willing to lend a hand where needed and go that extra mile. Along with his wife Jennifer, he provided several of his in-laws with housing and comfort over the 50+ years of their marriage.
He had an infectious laugh that you couldn't help but join. He had a robust love for his friends and family. He was an exemplary husband and father, their care and comfort always foremost in his thoughts and deeds. Family was very important to him.
He had a fondness for Hawaiian shirts and was easily identified by the bright colors he wore. He was a hunter, who didn't come home with a deer, but used his "hunting time" to connect with the natural world around him. He spent much of his time with his brothers, over the years, at a camp in Shirley, Maine.
As a proud Patriot, he was a member of the Rochester American Legion, as well as the Farmington Fish and Game association. His love of his country was as solid as he.
He leaves behind, his loving wife Jennifer (Seeley) Marble, better known as "doll", his daughter Heather and her husband Rob Letourneau, his daughter Stephanie and her husband Justin Baxter, and his grandchildren Tristan Letourneau, and Farryn Leppanen, as well as numerous nieces, nephews, brothers and sisters in-law.
He is predeceased by his parents, as well as his two brothers, John and Gaylen Marble.